A cinquain is a five-line poem that was invented by Adelaide Crapsey. She was an American poet who took her inspiration from Japanese haiku and tanka. A collection of poems, titled Verse, was published in 1915 and included 28 cinquains. Cinquains are particularly vivid in their imagery and are meant to convey a certain mood or emotion. Explore several examples of cinquain poems and their format. 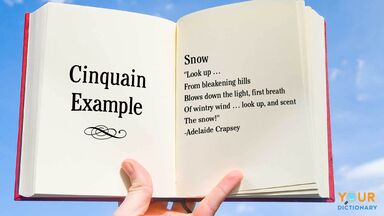 Originally, Adelaide Crapsey created the form for the American cinquain with five lines. Each line is stressed in a specific way. Additionally, as the form progressed, a syllable structure was added.

Explore the composition of each line by looking at the specific stressed and unstressed syllables.

Following the invention of this form, writers made changes to the form and included a certain number of syllables per line.

Even though iambic feet were typically used in these cinquains, it was not a requirement of the structure. See how this cinquain poem form worked through a classic Crapsey example.

Because Adelaide Crapsey created the cinquain as a poetic form, the best example of a cinquain is a poem that she wrote titled "Snow."

"Look up …
From bleakening hills
Blows down the light, first breath
Of wintry wind … look up, and scent
The snow!"

Since its invention, there have been many variations of the cinquain. Explore a few different types of cinquain poem examples. Certain types of cinquains are also called quintains or quintets because they have five lines.

This is a very popular form of cinquain because of its simplicity. Instead of incorporating stress and syllables, it uses word counts.

Watermelon never felt more delicious than in this unique poem.

A fun wintry example of the cinquain form.

William Swink created a powerful castle example that demonstrates the power of this form.

This didactic form is just slightly different from the first form in that the fourth line is a complete sentence and may have more than four words.

See this cinquain form in action through these examples.

See the rhyme of this form through a fun acrobat example.

The feeling and use of words shine in this star cinquain example.

Get a smile from this cute little penguin example.

"Penguins
White, black
Waddling, swimming, eating
They are playing in the water
Emperors"

While didactic cinquains are one of the most popular among students, it can be good to see a few longer cinquain poems in action.

My Love by Abigail Gronway

Explore a garland cinquain in action by looking at this poem by Abigail Gronway.

"my love
to you I give,
nor could I less bestow
than that which you have given me,
dear heart

dear heart,
you are my life,
my voice, the air I breathe,
the center of my universe,
my sun

my sun,
fill me with light,
and all my life I’ll give —
to orbit ‘round you will be my
delight

I care,
and so I’ll go,
to leave you for a day,
until the day when I can show
my love

my love,
you are my life,
and all my life I’ll give,
as if it were enough to show
my love"

See an example of a reverse cinquain by looking at this unique cinquain poem.

"Two wolves
lives in each of
us to make us what we
are, though we train them how to serve
our goals.

They both
compete to make us what we are.
So train them well and choose
the wolf that you
will feed."

Write Your Own Cinquain

Now that you have read some examples of cinquain, you see how easy it is to write your own. Keep your love of poetry going strong by checking out haiku poem examples.