Circular reasoning, from the Latin Circulus in Demonstrando, occurs when the end of an argument comes back to the beginning without having proven itself. This form of reasoning is considered a pragmatic defect, or informal fallacy, rather than a formal logical fallacy because it follows a valid pattern of argument: A proves B. However, unlike a logical argument, B depends on A to be true, causing the statement to loop back around. 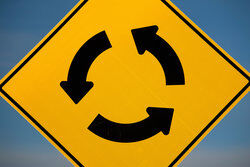 Circular reasoning is also known as circular questioning or circular hypothesis. It can be easy to spot because both sides of the argument are essentially making the same point. For example:

All of these statements cause the listener to ask, “But how can you be so sure?” They offer no valid evidence besides the assertion that A proves B.

Politicians are well versed in rhetoric, but can often damage their arguments with circular reasoning. A common political example involves explaining that a particular policy should not be legal because it is not yet lawful. Another example might be that an elected official should be respected because they are an elected official.

Look at this quote from Donald Trump in February 2017:

Perhaps the most famous literary example of circular reasoning leading to a paradox – or a situation in which two realities cannot exist – is the common “What came first: the chicken or the egg?” question.

A popular literary example of circular reasoning is the titular “catch” from Joseph Heller’s Catch-22.

"Sure there's a catch," Doc Daneeka replied. "Catch-22. Anyone who wants to get out of combat duty isn't really crazy."

The narrator explains that the only way to avoid air combat was to claim insanity; however, recognizing the danger of these missions established one’s sanity. The phrase “catch 22” has become a colloquialism that describes being trapped in a circular argument with no way out.

Roughly translated from the Latin phrase Petitio Principii, begging the question describes an argument that assumes the first part is true in order to prove the second – much like circular reasoning. In fact, modern usage often considers these concepts interchangeable.

However, there are some nuances in the circularity of the argument that separates them.

Circular Examples of Begging the Question

Begging the question arguments can be circular arguments as well. For example:

Eighteen-year-olds have the right to vote because it’s legal for them to vote.

Non-Circular Examples of Begging the Question

Because begging the question simply asks that you assume the first part of the argument, it doesn’t necessarily need to be circular. For example:

Eighteen-year-olds are mature, so they should have the right to vote.

The best way to get out of a circular argument is to ask for more evidence. Whether you are arguing with someone who relies on their conclusion to prove their premise, or you are writing a potentially circular argument in an essay, adding outside evidence can end the loop. Being open to changing your mind based on evidence is important when keeping an argument from becoming circular.

Eliminating fallacies is an important step when crafting rhetorical arguments. Learn more about other logical fallacies -- like the straw man fallacy that’s based on attacking a distorted version of the original claim, or the post hoc ergo propter hoc fallacy, which infers a causal relationship where one might not exist -- to ensure that your argument is truly valid. This is how you can avoid falling for a flawed assertion too!