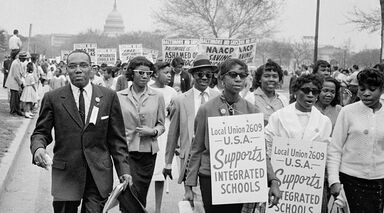 Group of People Demonstrating on Behalf of School Integration 1959
Advertisement

In 1954, when deciding the Brown v. Board of Education of Topeka case, the U.S. Supreme Court unanimously ruled that segregation of public schools was unconstitutional. This decision determined state laws touting "separate but equal" to be an unconstitutional violation of the 14th Amendment, which guaranteed all citizens “equal protection of the laws.” As a result, all public schools were required to integrate.

On August 24, 1955, Emmett Till, a Black 14-year-old from Chicago, was visiting his cousins in Mississippi. The boys went to a local store owned by Roy Bryant, a white man, who accused Emmett of whistling at his wife, Carolyn. Four days later, Bryant and his half-brother, John William Milam, went to Till’s cousin’s house. They kidnapped, beat, tortured, murdered, and dumped Till in the Tallahatchie River. His body was eventually found, and his family had an open-casket funeral so that the world could see what had been done to their only son.

A picture of Emmett’s mutilated body was published in a popular magazine called Jet, eliciting an outcry that resulted in the story being picked up by the mainstream media. Bryant and Milam were tried for murder but ultimately acquitted. A year later, they admitted their guilt to a reporter, but could not be tried again due to double jeopardy.

On a fateful day in 1955 in Montgomery, Alabama, Rosa Parks refused to yield her seat on a city bus to a white patron. She was arrested and jailed, which led to a mass protest of Alabama's bus segregation laws that lasted more than a year. The protest was coordinated by the Montgomery Improvement Association under the leadership of Martin Luther King, Jr. The protest is credited with playing a role in the Supreme Court's decision in Browder v. Gayle (1956), which ended public bus segregation.

In 1960, groups of Black students attending college in Nashville, Tennessee coordinated a series of protests against segregated lunch counters. Future congressman John Lewis was among the student leaders. Students simply entered diners, sat down at the counters and refused to leave. Some proprietors closed their businesses rather than serve the Black students. The home of an attorney who was working with some of the protestors was bombed. After a few months, Nashville's mayor and the protestors entered into a dialogue, which ultimately led to Nashville becoming one of the first large cities in the South to desegregate public services like lunch counters.

The March on Washington for Jobs and Freedom took place in 1963. Approximately a quarter of a million people attended the event from all across the United States, making it the largest civil rights gathering to date. The event's purpose was to support the pending Civil Rights Act and to seek an end to employment discrimination, civil rights violations and disenfranchisement of Black Americans. It was during this march that Martin Luther King delivered his famous "I Have a Dream" speech.

In 1964, President Lyndon B. Johnson signed the Civil Rights Act of 1964 into law. This law was the first piece of U.S. legislation that focused on providing equal access to employment and educational opportunities. This law made it illegal for employers and educational institutions to discriminate against individuals on the basis of race, color, ethnicity, sex, or religion. It also established the existence of the Equal Employment Opportunity Commission (EEOC).

In March of 1965, around 600 civil rights activists gathered in Selma, Alabama to march to Montgomery to protest a recent police killing of a young Black preacher. The gathering became known as Bloody Sunday. At the Edmund Pettus Bridge, a blockade of state troopers and other officers ordered the protestors to stop. The protestors kept going. The officers advanced on them, launching tear gas and striking into the crowd with clubs. Officers on horseback even chased and beat protestors who tried to flee. More than 50 people were injured, 17 of whom had to be hospitalized. John Lewis, who would later become a member of Congress, was among those seriously injured.

The purpose of the Voting Rights Act of 1965 was to ensure that the 15th Amendment, which extended voting rights to Black citizens, would be upheld as intended. It outlawed discriminatory voting practices that had become commonplace in many southern states after the 15th Amendment was passed. For example, it prohibited states from requiring people to pass a literacy test in order to vote. It also made it illegal for people to be required to pay a poll tax before being allowed to vote.

In 1968, Civil Rights Leader Martin Luther King, Jr. was assassinated in Memphis, Tennessee. The civil rights icon was in Memphis to participate in an event in support of sanitation workers, who were on strike to protest unfair treatment and discrimination in the workplace. While preparing to go to dinner with a group of people, King was struck by a single bullet and killed. His legacy of contributions to the Civil Rights Movement impacted or was affected by all of the events on this timeline and countless others. His vision changed the world and continues to impact the current and future state of civil rights in the U.S. and around the world.

Explore this timeline for a pictorial representation of the key Civil Rights Movement era events discussed above. This brief overview helps show how these pivotal events unfolded, leading to major accomplishments and advancements for Black Americans.

Beyond the Civil Rights Era

The struggle for civil rights began long before the first event on this timeline and continues to this day. It stretches all the way back to the early days of slavery, through the Underground Railroad, the U.S. Civil War, the Emancipation Proclamation, Jim Crow Laws, and many injustices and events. In recent years, groups like the Equal Justice Initiative (EJI) and Black Lives Matter (BLM) continue the struggle. Now that you're familiar with some major Civil Rights Movement events, explore some key differences between civil liberties and civil rights.