The American Civil War tested the strength, the principles and the future of the United States. If a few pivotal events had gone differently between 1861 and 1865, the country would be forever changed. Take a look at a Civil War timeline to learn the key dates of the Civil War and how they contributed to the Union victory. 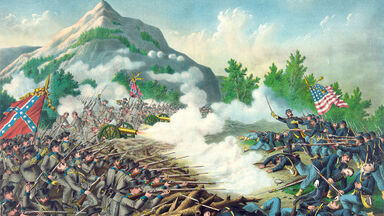 The Rocky Path to War

Just over a month after Abraham Lincoln's 1861 inauguration, the first shots of the Civil War were fired in South Carolina. Both sides hoped for a quick and decisive end to the conflict, but both sides were wrong. Explore some of the key events in the Civil War timeline.

After President Lincoln refused to remove the Union soldiers stationed at Fort Sumter, South Carolina, Confederate soldiers fired on the fort on April 12, 1861. They attacked all through the day and night until Union Major Robert Anderson surrendered. No one was killed, but the war had begun. Days later, President Lincoln declared the act as an insurrection and called for 75,000 Union militia.

Virginia seceded days after Lincoln's call for troops. Arkansas followed suit in May, and Tennessee left the Union in June. The Confederacy now consisted of eleven states. On April 19, 1861, President Lincoln issued a Union blockade that prevented supplies from entering or leaving the Confederacy.

While Fort Sumter was the first conflict of the Civil War, the first full battle took place at Bull Run, Virginia (known as the Battle of Manassas in the Confederacy) on July 21, 1861. The bloody encounter resulted in a Confederate victory, as well as around 2,800 Union and 2,000 Confederate casualties, the replacement of Union Brigadier General Irvin McDowell, the disarray of Federal troops, and a very uncertain future for the United States.

Also known as the Battle of Pittsburg Landing, the Battle of Shiloh took place in southwest Tennessee on April 6-7, 1862. General Ulysses S. Grant led 65,000 Union troops against the outnumbered Confederates, who halted their attacks without knowing that Union reinforcements were on their way. The battle resulted in over 23,000 casualties, more than any battle in American history to that point, and a Union victory — though both sides now better understood the magnitude of this war.

The rest of 1862 saw an escalating series of battles, including General George McClellan's Peninsular Campaign in southeastern Virginia. Both the Southern Rebels (or "rebs") and the Northern Federals (or "feds") were suffering heavy losses and not gaining much ground, leading both sides to reexamine their wartime strategies. The Confederates did so on June 1, 1862, when General Robert E. Lee took command of the Confederate Army.

General Lee and General McClellan faced off in seven battles at the end of the Peninsular Campaign from June 25 to July 1, 1862. The Seven Days Battle ended with over 35,000 casualties total (20,000 on the Confederate side alone), and the new knowledge that the military expertise of Robert E. Lee might prolong the war more than anyone had previously thought.

After the first Battle of Bull Run ended in disaster for the Union, the Northern troops were struggling to gain ground in Virginia. Major General John Pope led 70,000 Union troops back to the Bull Run battleground on August 28, 1862. General Thomas "Stonewall" Jackson and 55,000 Confederates held off the Union advance over the next few days, and on August 30, the Union retreated from Bull Run once again.

Lee and McClellan met again only a few weeks later at Antietam Creek, Maryland. The Battle of Antietam took place on September 17, 1862, and remains the bloodiest single day in American military history with 23,000 casualties. There was no decisive victor (although the Union did prevent a Confederate victory in Union territory), leading Lincoln to remove McClellan from command.

On December 11, 1862, nearly 123,000 Union troops and 78,000 Confederate troops fought in the largest Civil War battle yet. Union Major General Ambrose E. Burnside attempted to do what his predecessor, General McClellan, couldn't — take Richmond from the Confederates. However, after four days of combat, Burnside and the Union Army retreated back across the Rappahannock River after a devastating defeat.

The beginning of 1863 saw a need for additional forces to replace fallen soldiers on both sides of the Civil War. Conscription acts in both the North and the South made men between the ages of 20 and 45 eligible for mandatory military service. The end of the war seemed very far away — until the Battle of Gettysburg.

July 1863: The Battle of Gettysburg

Historians consider the Battle of Gettysburg to be the turning point of the Civil War. When General Lee tried to invade Union territory in Pennsylvania on July 1, General George Meade and the Army of the Potomac were able to hold him off at Gettysburg. It was also the costliest in terms of human life, as more than 50,000 men died in the three-day battle. On November 19, 1863, Abraham Lincoln would deliver his most famous speech, the Gettysburg Address, and dedicate part of the battlefield as a national cemetery.

November-December 1864: Sherman's March to the Sea

The Union had successfully defended the Northern territory, but the deep South was another question. General William T. Sherman's troops managed to capture Atlanta, Georgia on September 2, severely impacting the Confederate Army's access to food, weapons and other supplies. On November 15, Sherman led his troops on a nearly 300-mile march to Savannah to project a threatening presence to the civilians in Georgia. Southern troops fled before Sherman's troops could reach them, and by December 21, there were no soldiers left to defend Savannah from Sherman's forces.

The loss of Atlanta and Georgia proved an insurmountable hurdle for the struggling Confederates. Richmond fell to Union forces on April 2, 1865, and General Robert E. Lee surrendered to General Ulysses S. Grant at the Appomattox courthouse one week later on April 9. However, Lee only surrendered the Army of Northern Virginia; it would take 16 additional months for every commander to surrender their armies and for the Civil War to officially end.

April 1865: The Assassination of Abraham Lincoln

On April 14, 1865, only five days after General Lee's surrender, President Abraham Lincoln was assassinated at Ford's Theatre in Washington, D.C. The assassin was John Wilkes Booth, an actor and sympathizer to the Confederacy. Lincoln passed away early the next morning on April 15, and Vice President Andrew Johnson was sworn in as the 17th President of the United States. A lengthy manhunt to capture Booth ended on April 26, when he was found and shot by Union troops.

The Civil War was a moment of reckoning for the United States. After the states were reunified, a period of reconstruction and reconciliation defined the country moving forward. For more information on this period, take a look at examples of Jim Crow laws that set newly freed slaves apart from the rest of society. After that, check out a timeline of the civil rights movement that brought national attention to the Southern legacy of slavery and societal prejudice.