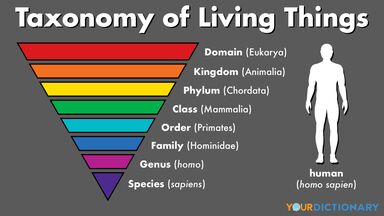 There are three domains: Eukarya, Bacteria and Archaea. The broadest way to classify a living thing is to decide which of these three domains it falls within.

Domain was not always included in the taxonomy of living things. It was taught as a seven-level taxonomy for many years, but an eighth level (domain) was added in 1990.

The basic taxonomy of living things includes six kingdoms. Each of the three domains (above) is associated with particular kingdoms.

Example: For each level, review how humans are classified. Humans belong to the kingdom Animalia.

Once a decision has been made about which kingdom a living organism should be classified in, the next step is to determine which phylum it belongs in. There are multiple phyla (plural of phylum) for each kingdom. Examples of some of the most commonly known phyla include:

Example: Humans are in the phylum Chordata.

Once an organism has been assigned to a phylum, assigning it to a class is the next step in classification. Many classes are assigned to each phylum. Examples of several classes in the phylum Chordata include:

Example: Humans are in the class Mammalia.

Once an organism has been assigned to a class, the next step in classification would be to use a taxonomic key to assign it to an order. Each class includes several orders. For example, there are 19 orders within class Mammalia. A few examples include:

Example: Humans are in the order Primates.

After identifying an organism's order, the next step in classification is to determine which family it is in. Each order has multiple families. A few of the dozen primate families include:

Example: Humans are in the family Hominidae.

Each family in the taxonomy of living things can be identified by genus. For the family Hominidae, the genus divisions are as listed below. Please note that, unlike the previous levels, genus and species names should not be capitalized and should be italicized.

Example: Humans are in the genus homo.

The final level of classification is species. In some cases, there is only one species per genus, while there are multiple species for others.

Example: Humans are in the species sapiens.

Acronym for Remembering the Taxonomy

This taxonomy is grounded in the work of Carl Linnaeus, who in the 1700s introduced the first system for classifying living organisms in a consistent manner. Prior to the introduction of the Linnaean system, there wasn’t an agreed-upon system for categorizing living organisms. The system he introduced centuries ago has been refined by scientists over hundreds of years, yet still forms the basis of the system used today.

Now that you have a basic understanding of how living organisms are classified, you should understand what it means when humans are referred to as homo sapiens. That is simply the proper terminology for the genus and species of human beings. Further expand your scientific knowledge by exploring the key characteristics of living things.