Clever Frame Narrative Examples (A Story Within a Story)

A frame narrative or story within a story is a distinctive literary device that many great writers have used over the years. In a frame narrative, an additional story is inserted within the main story. Sometimes, the main story only serves as an introduction and conclusion for the framed story, but sometimes it plays a larger role. The best way to understand frame stories is through examples. 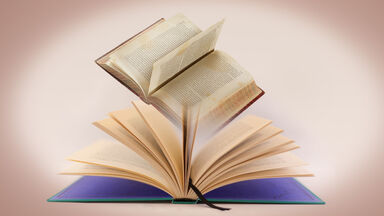 a story within a story
Advertisement

Although Frankenstein is mainly the story of Victor Frankenstein and the monster he creates, this part of the tale is actually set within another story. Robert Walton is an explorer headed to the North Pole when his ship becomes entrapped by ice. In the distance, he sees a figure on a sledge. After the breakup of the ice, his ship rescues a man floating alone on a sledge. Robert is lonely and confides in the rescued man about his goals for his scientific work. The man becomes overcome with emotion and shares his own story.

The rescued man is Victor Frankenstein. He hopes to warn Robert about the perils of pursuing scientific research beyond the boundaries of nature, so he tells of creating his monster. Victor Frankenstein’s tale becomes the main story, but the narrative returns to Robert at the end.

Wuthering Heights is a unique narrative in that it is a frame story with an unreliable narrator. Initially, the story is focused on Mr. Lockwood, the new tenant of Thrushcross Grange. Mr. Lockwood becomes curious about the neighboring estate, Wuthering Heights, and about the history of the two estates. He asks his housekeeper, Nelly Dean, to tell him the history of the place.

Nelly’s story details everything that happened to Heathcliff and Catherine, but she tells it from her own limited perspective and has a tendency to exaggerate. This makes up the primary portion of the novel, but at the very end, the story returns to Mr. Lockwood and his impressions of the place upon learning its history.

Heart of Darkness by Joseph Conrad

Heart of Darkness is another classic frame narrative. This tale starts with several men sitting together and waiting for the tide to come in. As they wait, the sailors tell stories to pass the time. Marlow, one of the sailors, tells the rest about his voyage up the Congo in Africa.

The events Marlow recalls become the main story of Heart of Darkness. Marlow becomes obsessed with the character of Kurtz, and much of the story involves his pursuit of Kurtz and his reconciliation with Kurtz’ eventual death.

The Canterbury Tales by Geoffrey Chaucer

The Canterbury Tales is different from some other frame narratives in that it actually contains many smaller stories within the frame. The initial story is of the Host, who suggests that all the pilgrims staying at the inn tell stories on their journey to Canterbury. He offers a free meal to the person who tells the best story.

The narrative then proceeds with stories told by each character, starting with the knight. Because of the frame story format, the disparate stories and characters hang together as one collected work.

Another form of frame story is to tell a story as a separate, smaller portion of a larger narrative. In Hamlet, Shakespeare brings in the players who perform the play-within-a-play The Murder of Gonzago. Hamlet interacts with the players directly, connecting them to the larger narrative.

The frame narrative is an interesting choice, serving as a sort of allegory for the events of the larger play. It also provides a sort of intermission or distraction for the audience.

Not all frame narratives are prose. In fact, poets can also employ this literary technique to great effect. One excellent example is Ozymandias by Percy Bysshe Shelley. In this sonnet, Shelley begins with these lines:

I met a traveller from an antique land,

The rest of the poem, which tells about a ruined statue, is a quote from the traveller. This narrative style, while uncommon in poetry, serves an important purpose. It creates distance between the poet and the speaker, and it also makes the tale seem more exotic.

An Important Element of Story Writing

Choosing a narration style is one of the most important decisions a writer can make. How the story is told and whether it’s part of a larger story is one of the essential elements of story writing. In some cases, it’s the best way to make the story feel powerful and realistic.