The Cold War (1947-1991) describes decades of political hostility between the United States and the Soviet Union. The conflict was defined as "cold" because neither the U.S. nor the USSR (Union of Soviet Socialist Republics) officially declared war against the other. However, several pivotal moments nearly pushed the two nations — and subsequently, the world — to nuclear war. Take a look at a Cold War timeline that details the key conflicts and events of the mid-20th century. 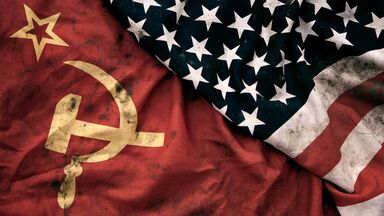 The Cold War in Context

Toward the end of World War II in 1945, Germany found itself facing the Allied forces of the world, including both the U.S. and the USSR. Despite ideological differences between the democratic nation and the communist Soviet Union, their leaders had a singular focus: to stop Adolf Hitler in his quest for world domination.

It didn't take long after Hitler's defeat for conflict to arise between the USSR and the other Allied powers in redistributed Germany. In his 1946 "Sinews of Peace" speech, Winston Churchill named the Joseph Stalin-led Soviet presence as "an iron curtain" across Europe. Britain, France and especially America's discomfort with the potential spread of Soviet communism was matched by the USSR's disdain for Western capitalism.

The 1960s brought an increased amount of suspicion on both sides of the Cold War. The tension came to a head during the Cuban Missile Crisis, as nuclear war seemed possible and even imminent for 13 full days. Changes in leadership forced both nations to reexamine their national priorities and to focus on their ideological values.

The four decades of the Cold War had many dramatic twists and turns, as well as international incidents. Take a look at a visual Cold War timeline that shows how one pivotal event quickly led to another.

Although the Cold War did eventually have an end date, it was not due to masterful negotiations or international friendship. The collapse of the Soviet Union would impact Europe for decades — and the relationship between the United States and Russia would continue its uneasy legacy for years to come. For more information on the U.S. involvement in foreign wars and relationships, check out a timeline of American wars since the American Revolution.