Commensalism, which literally means "to eat at the same table" (thanks, Latin!), is one form of symbiosis, a relationship between two organisms of different species. In a commensal relationship, one organism benefits while the other is generally unaffected. 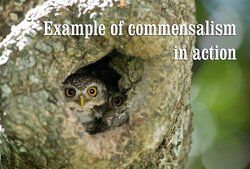 Commensalism is one of the most common relationships in nature, and we've gathered lots of examples of commensalism to illustrate it in action.

Everything in nature is interconnected in one way or another. And many of these relationships are commensalistic in nature.

Birds that live in the hollows of trees are commensal. Their presence generally does no harm to the tree, but the tree provides the bird with shelter and protection.

While bromeliads themselves can be commensal or parasitic, the pools of water they collect are a vital environment for dozens of commensal species, from insects to crabs to salamanders. Most of these species do the bromeliad no harm, but benefit from the shelter and water provided by the plant.

These birds live near cattle because when the cattle graze, their movements stir up insects. Unlike oxpeckers, they don't engage in cleaning symbiosis, picking parasites off the cattle they follow. Cattle egrets simply scoop up the insects disturbed by the passage of the larger animal. The birds get a meal and the cattle are unbothered, making for a terrific example of commensalism in action.

Epiphytic plants are plants that grow on a support, often another plant, to reach air, water and sunlight. Some are parasites, like the accurately named strangler fig. Others, including species of orchid and fern, don't affect the plant they're balanced on.

The Gila woodpecker itself isn't a commensal organism, since it hacks holes in Saguaro cacti to live. To state the obvious, the cactus would rather they not do that. But once the woodpecker abandons the hole and it heals over, small mammals and birds often move in, gaining shelter and doing the cactus no further harm. That's a commensal relationship.

These small fish live on sea animals, often changing color to blend in. The presence of a goby offers no benefit to its host, but it gains protection and access to food.

Golden jackals that are no longer in a pack will follow tigers in order to feed on the remains of their kills. The tigers gain no benefit nor receive any harm from the presence of the golden jackals, but the latter get to enjoy a meal.

Hermit crabs are an example of metabiosis, a type of commensalism in which one organism creates an environment suitable for another. These crabs live inside the shells of dead snails. Obviously the snail is unaffected, and the crab gains shelter.

Mites may be the ultimate commensals. These tiny arachnids live on the bodies or in the nests of thousands of species (including humans!). While some mites are parasitic, most are far too small and passive to have any effect. Several species of commensal mites have evolved specifically to live on humans, notably Demodex folliculorum, which is probably on your skin right now! You're welcome.

These tiny arachnids (they max out at about half an inch long) look like scorpions without stings. They practice a kind of commensalism called phoresy, in which an organism uses another for transportation.

Pseudoscorpions hitch rides under the wing covers of large beetles or in the fur of mammals. As long as the pseudoscorpion is riding a larger animal, it's comparatively safe from predators, and it gets the opportunity to drop off in a more profitable place. Some pseudoscorpions do snag parasites off their hosts, making them mutualistic, but most are just there for the ride.

In the desert, plant seedlings (and pretty much everything else) can struggle to find enough water to survive. That's where nurse plants come in. Nurse plants create shade and shelter, protecting seedlings from both predators and the sun. Nurse plants gain no particular benefit from the presence of the seedlings, but the seedling would die without them.

Other Forms of Relationships

Commensalism isn't the only way different species relate to one another. As noted in the introduction, there are three other major categories of interspecies interaction.

Amensalist relationships are relationships where one party is unaffected and the other suffers. These can be as minor as grass being crushed under an animal's foot, or as complex and important as mold secreting penicillin, destroying bacteria, and incidentally inventing modern antibiotics. The mold doesn't care one way or the other, but it's bad news for the bacteria.

Got a cat? Dog? Bearded dragon? If so, you have mutualism. Mutualism describes relationships where both species benefit. Human housepets, clownfish in sea anemones, and birds picking scraps from the teeth of alligators are all mutualistic relationships. Your cat or dog or lizard gets food and a warm place to snooze, and you get companionship.

If you've ever been bitten by a mosquito or had to shoo a fly from your eye, you've met parasites. Parasitism is when one species in a relationship benefits and the other is harmed. Alongside the mosquito, specifically the pregnant lady mosquito because those are the only ones that bite, fleas on dogs, horseflies on, well, horses, and leeches on basically everything are all parasites.

All Creatures Great and Small

These examples of commensalism in action detail the incredible diversity of relationships in nature. That diversity represents the complex and beautiful processes that drive the natural world.

For more examples of those processes, check out Examples of Symbiosis.