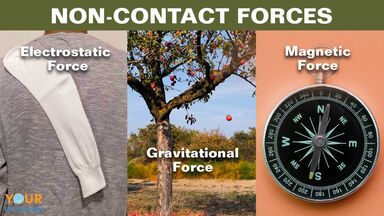 Magnetic force occurs when two magnetic fields interact with each other. Moving charges on metal objects create magnetic force, which can be either a pull (attraction) force or push (repulsion) force. Magnets that stick to a refrigerator or metal file cabinet stay in place due to magnetic force. Other illustrations of magnetic force include:

The forces described above are ones that do not require objects to come in contact with one another. They do not represent all of the different kinds of forces. Some forces require contact. Now that you are familiar with some common examples of non-contact forces, expand your knowledge of physics by reviewing examples of the different types of contact forces in physics. Then, continue your force education with balanced and unbalanced forces.