Though types of fungi can be quite different, each type plays an important role in Earth’s ecology. Fungi eat dead materials, helping them to decompose and become new soil. Keep reading to learn more about fungi and to see common examples of fungi in various habitats. 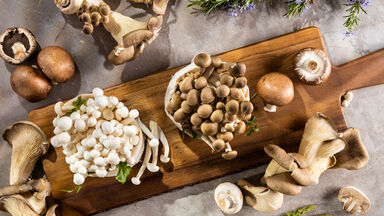 Different kinds of fungi can range from microscopic organisms to huge mushrooms. It all depends on which phylum, or taxonomic category, they belong to. Here are five major phyla in the fungi kingdom.

Members of the phylum Ascomycota have some of the most wide-ranging uses. There are nearly 64,000 different ascomycetes, which are found everywhere from cheese to lichens. Check out where you may be able to find common fungi in the Ascomycota phylum:

When you think of fungi, you probably think of mushrooms – which belong to the phylum Basidiomycota. Plant diseases, such as rust and smut, and puffballs, which release spores with a puff of air, are also basidiomycetes. Specific examples include:

Fungi in phylum Chytridiomycota, also known as chytrids, are the oldest type of fungi. They are microscopic organisms that are typically found in freshwater. Chyrids create asexual motile spores that need water to swim.

Some examples of chytrids include:

Although there aren’t as many types of fungi in phylum Glomeromycota as other phyla in the fungi kingdom, they still play an important role in their terrestrial and wetland habitats. Glomeromycetes form symbiotic relationships with their plant hosts, also known as arbuscular mycorrhizae. The fungus provides nutrients to the plants, which provides the fungus energy needed to reproduce. Some examples of glomeromycetes are:

If you’ve ever taken out a loaf of bread and discovered a fuzzy black mold, congratulations – you’ve seen zygomycetes! There are over 1000 species of fungi from phylum Zygomycota, most of which serve as decomposers in soil.

Here are some examples of zygomycetes:

Whether they’re mushrooms, yeast, molds, or parasites, fungi play an important role in their ecosystems. Without fungi, there would be natural waste everywhere with nothing to help decompose it! For more examples of organisms and their roles in a biosphere, check out an article about the processes of a natural ecosystem.