From the air you breathe to the sugar making those cookies so sweet, molecules are everywhere. Use molecule examples to get a clear picture of what a molecule is and how it differs from an atom, element, or compound. 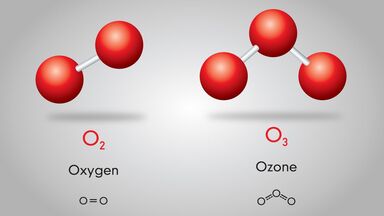 A Look at Molecules

Chemistry can get confusing. Terms like atoms, compounds, elements, and molecules are thrown around all the time. But what exactly is a molecule? In simple terms, a molecule is an atom that forms a chemical bond with another atom. This could be another atom of itself in the case of the oxygen gas humans breathe (O2), or it could be bonding with another atom as in when two hydrogen atoms chemically bond with oxygen to make water (H2O). See this in action through examples.

Molecules come in all different shapes and sizes. You might have a small molecule like carbon dioxide (CO2). Then again, a molecule might be huge like hemoglobin (C2952H4664O832N812S8Fe4). Imagine trying to write that chemical formula a few hundred times! While most aren’t that big, explore a few common molecule examples you might know.

While these are just a sampling of common molecules, there are a lot of molecules. Some you know, while others might be a bit more uncommon like ascidiacyclamide benzene solvate (C36H52N8O6S2), which is found in coral reef systems.

Now that you have molecules down to a science, it’s time to examine what a compound is. A compound is actually a type of molecule. However, to be a compound, the atoms bonding together need to be different from one another. For example, O2 is a molecule but not a compound. Why? Because it’s bonding with another oxygen atom. On the other hand, NaCl is a compound because it is two different atoms chemically bonded together. Other examples of compounds include:

Non-Examples of a Molecule

An atom is the smallest particle of matter. It includes protons, electrons, and a nucleus. So, atoms are your starting units for a molecule. For example, a single hydrogen atom (H) is not a molecule; instead, it would be called an atom. However, if you add two hydrogen atoms together (H2), you now have a molecule. Other non-examples include:

The Wacky World of Molecules

When it comes to chemistry, things can get confusing fast. Just the fact that atoms are made up of molecules and compounds are a type of molecule is enough to make your head spin. Add into that the finer details of elements, and knowing what is a molecule and what isn’t can get very confusing. Thankfully, molecule examples work to clear everything up. Ready to learn more about compounds? Dive into examples of organic compounds and hydrogen bond examples. Chemistry is fun!