Predation involves one organism (the predator) catching and killing another organism (the prey) for sustenance. It may be easy to think of predators like bears, lions, or sharks, but can you think of other examples of predation in biology? Take a look at the ways predation keeps the circle of life going in various species. 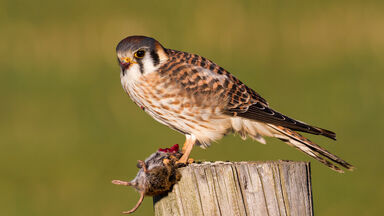 Predation Examples in the Invertebrate World

Invertebrates, or animals without a backbone, include spiders, insects, and octopi. Unlike most other predators, invertebrates tend to eat their prey while it is still alive. Many invertebrates don’t hunt for food, preferring to set traps or lie in wait for their meal.

Some examples of invertebrate predation include:

Predation Examples in the Bird World

It seems odd to think of cute songbirds as vicious predators, but almost all birds hunt prey in some way. They are also often hunted by other predators in their food chains. In fact, eagles and condors are the only birds that don’t have natural predators.

You can see examples of bird predation in these situations:

Predation Examples in the Fish World

You may have heard the expression “there’s always a bigger fish.” In the fish ecosystem, that saying is true – except maybe for the great white shark! Examples of fish predation include:

Predation Examples in the Reptile and Amphibian World

Most reptiles eat other animals for sustenance. Depending on the size of the reptile, their prey can be as small as a fly or as large as a gazelle. Their style is to strike when the moment is right rather than stalking and hunting their next meal.

Reptile and amphibian predation can include:

Predation Examples in the Mammal World

Mammals are often the apex predators of their food chains. They include big cats, canine packs, and marine mammals. Even your house cat is considered a predator!

Here are some ways you’d see predation by mammals:

Predation Examples in the Plant World

Did you know that plants can be predators, too? Although carnivorous plants can’t exactly move around to hunt their prey, they can wait for the perfect opportunity to consume insects or small animals. Some predatory plant behavior includes:

Predation Examples in the Microscopic World

You don’t have to be big to be the top of your food chain. Microscopic organisms can be predators as well. Here are some examples of microscopic predation:

Some consider any type of eating behavior that involves using another organism as predation. However, there are a few traits that one can typically attribute to predators. Keep reading to learn what these traits can be.

While predators are especially good at catching prey, prey organisms have also developed impressive defense techniques. If a predator fails to catch lunch, they can try again, but too many failures and they will starve. If prey fails to escape a predator, their life is over and they can no longer reproduce. The stakes are high in each example of predation.

How the Food Chain Works

Predation is nature’s foolproof population control method. Without it, the world would be overrun with herds of herbivores or swarms of insects. Learn more about how various food chains work to keep ecosystems balanced with these examples of food chains.