A truism is a statement that is so widely accepted, it adds nothing new for the reader or listener, and truism examples can help you learn to recognize this type of writing and speech. Sometimes, a truism can be a useful literary device, but it’s essential you know when and how to use one. 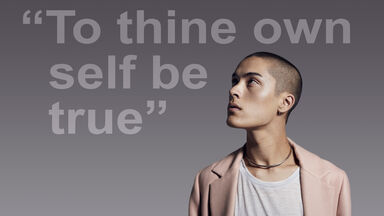 truism example to thine own self be true
Advertisement

What Is a Truism in Writing?

A truism is a phrase or sentence that sounds meaningful and profound on the surface but does not impart any new information or ideas. Generally, a truism is self-evident or obvious.

There are several types of truisms you may encounter in writing:

Using a Truism Intentionally in Your Writing

If you use truisms in your writing and speech, it can indicate a lack of originality or deeper thought. In general, it’s important to communicate original thoughts in your work, and it’s a good idea to avoid truisms for this reason.

However, it’s possible to use a truism intentionally, just as you would use a rhetorical question. Because a truism is something that is clearly true, it can help to reinforce the idea that you and your reader or listener are starting from some common ground. From this point of unity, you can build an original idea to communicate to your audience. An obvious truism can help you communicate a truth that is less obvious.

Most truisms in everyday speech are cliches, but some are also just statements that can’t be denied or refuted because of their obvious truth. Here are some examples:

In literature, authors can use truisms to show a lack of imagination or a childish perspective in a character. They can also use truisms to create a bond with the reader.

The Old Man and the Sea

In The Old Man and the Sea, Ernest Hemingway has the character of Santiago speak this truism:

“I try not to borrow, first you borrow then you beg.”

The Winter of Our Discontent

John Steinbeck has his main character, Ethan, repeat a truism in conversation with Maurillo in The Winter of Our Discontent:

“Old Cap’n, he was my grandfather, used to say, ‘If you want to keep a friend never test him.’”

Groucho and Me: The Autobiography of Groucho Marx

Groucho Marx was famous for uttering truisms in creative and amusing ways, and his autobiography is no exception. Here’s one gem from it:

“Age is not a particularly interesting subject. Anyone can get old. All you have to do is live long enough.”

In Hamlet, Shakespeare has the character of Laertes say something that may be considered a truism today:

“This above all: to thine own self be true.”

Truism Is a Misused Word

It’s worth noting that the word “truism” is commonly misused to mean something that is true and meaningful. While truisms are true, they are also obvious. Next time you consider using the word, make sure the statement you’re describing is self-evident. It’s a simple way to avoid an embarrassing mistake.