Imagine that you read an article about a political scandal, confirming everything you thought about a politician you dislike. You text a friend, who supports the politician, and she thinks the article completely vindicates the politician. How did you both read the same article and come up with different conclusions? It could be an example of confirmation bias.

Confirmation bias occurs when a person interprets a situation according to their own pre-existing beliefs. Also known as “myside bias,” the slanted cognitive perspective ignores information that invalidates their opinion. Each new set of evidence serves to prove what the person already believes, reinforcing one’s personal bias and stereotypes. 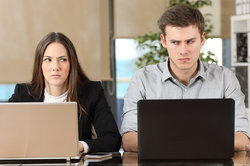 There are many forms of bias that affect a person’s point of view. Confirmation bias is particularly problematic because it does not allow a person’s perspective to change based on evidence. It enables people with opposing beliefs to dig their heels in further rather than to adapt their mindset to the surroundings.

Before forensic science became an integral part of the criminal justice system, eyewitness accounts were the basis of a prosecutor’s case. However, confirmation bias can influence eyewitnesses to make non-factual assumptions. Hundreds of wrongful convictions involving confirmation bias by witnesses have been overturned in recent years.

For example, a neighbor who thinks dogs are inherently dangerous sees a vicious dog attack an innocent child. Another neighbor who loves dogs sees the dog defending itself against a menacing child. Neither eyewitness account is reliable due to confirmation bias.

Have you ever called or texted someone, only to receive no reply? Most people would assume the recipient is busy, but people with low self-esteem use confirmation bias to decide that the person must dislike them. They already thought this beforehand, and the lack of response simply “confirms” this preconceived idea.

Confirmation bias can also damage romantic relationships if one person believes that their partner is cheating on them. Any interaction, positive or negative, is now “proof” that their cheating theory is correct.

The scientific process mandates that evidence should support or not support a hypothesis. But, if there is a lot riding on the results of a study, such as potential funding or a scientific breakthrough, it can be tempting to only pay attention to data that proves the researcher is right.

One famous example is Andrew Wakefield’s 1998 study that linked the MMR vaccine to autism. It was retracted from the British Medical Journal in 2010 after evidence that Wakefield manipulated and ignored much of his data. Wakefield’s confirmation bias fueled his desire to establish a link to regressive autism – a disproven claim that still affects the medical community today.

Business and the Workplace

Confirmation bias is present in the workplace as well. Bias toward or against an applicant may affect the types of questions they receive in the hiring process. Employers tend to see women as less confident than their male counterparts, leading to women being passed over for positions and promotions. General dissatisfaction with an employee may lead to a manager viewing their work performance in a more negative light.

Believers of any faith may see everyday occurrences as proof of their religious convictions. Positive events are seen as miracles, while tragedies are seen as “tests of faith.” Conversely, people who do not belong to any religion may see the same events as reinforcement of their lack of faith. No matter how random or innocuous the evidence is, people who have a confirmation bias can use it to validate what they believe.

Social media users are faced with an overwhelming number of news sources, which vary in their credibility. Fake news takes advantage of social media by using sensationalist headlines and making unproven claims. Readers see these untrue articles, which align with their biased perspectives, and repost or share them, further spreading the misinformation.

When you believe something will happen, you often influence whether it actually happens or not. This is known as a self-fulfilling prophecy, which is a result of confirmation bias. For example, if you’re worried about being late for a job interview, you may have a sleepless night – leading you to wake up late for your interview.

It may seem that having a wealth of news sources and social connections are an automatic cure for confirmation bias. However, people are more likely than ever to seek confirmation of their own perspectives. Here are some reasons why confirmation bias still exists in the 21st century.

Chances are that most of your social media friends and followers agree with you on issues that you value. These friends post articles that reinforce what you believe, which you then repost for additional people to read. They click the “like” button and make comments you agree with.

If someone posts an opposing or (in your view) offensive opinion, you’ll either block or unfollow that person. These online and real-world echo chambers reinforce that a user’s perspective is the correct one.

The filter bubble from your search engine ensures that you only see results that you are interested in. If you and another person search for a term at the same moment, the Internet’s individualized algorithms can provide different results to each of you. Each time you click, you are influencing the subsequent advertisements and news recommendations that come your way.

Recent years have seen a rise in political division like never before. More voters insist that those with opposing views are closed-minded and ignorant – without examining their own biases or preconceived notions. Thanks to 24-hour news channels who compete for viewers, the most sensational story is often the one that sells, even if it’s not exactly true.

Partisanship is big business for those looking to interfere in elections, making fake news a problematic way to publish unproven claims. Without being challenged by alternate views, it’s difficult to interpret the validity of new information, making it easier to be tricked by false stories.

Studies have shown that implicit racial bias affects the way a person responds to a situation. Doctors take pain complaints from people of color less seriously, teachers are quicker to punish black or Hispanic students, and police officers are more likely to use deadly force against non-white individuals.

Typically, these professionals do not consider themselves to be racist. However, they are using clues from their environment to confirm a bias that people of color are not trustworthy. Confirmation bias makes implicit racism even more dangerous than outright discrimination.

It’s difficult to face one’s own bias. No one has the same background and experiences as another person, making it almost impossible to be truly open-minded. However, coming to terms with one’s own bias can result in a more accurate understanding of the world.

If you want to avoid confirmation bias, consider the following questions when reading a news article:

Once you’ve assessed your own bias, it’s time to pop those filter bubbles. Exposing yourself to different perspectives doesn’t always feel as good, but it is a rewarding (and important) experience.

Confirmation bias isn’t the only slanted way to view an event. Check out our article on hindsight bias, which occurs when someone claims that they had predicted an unpredictable event. You can also learn how using unbiased language avoids implicit bias in one’s writing.