In physics, the word force is used to describe the push or pull that occurs as objects interact with one another. A force that happens only when an object physically makes contact with another object is described as a contact force. There are many examples of contact forces in the world around you. 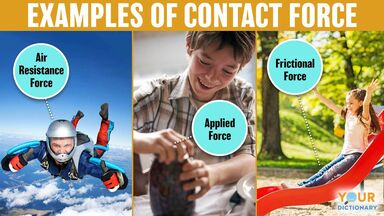 Contact force is the phrase used to describe a push/pull interaction that occurs when an object comes into contact with another object.

There are several different types of contact forces. Each refers to a specific circumstance.

Applied force occurs when a person or object directly applies force to another object, causing it to move. When you push a computer mouse that is sitting on a flat surface, this is an example of contact force between your hand and the mouse. The mouse would not move unless a force, in this case your hand, was in contact with it. Other examples include:

Frictional force, also known as friction, is any force that opposes motion. In other words, it is a force that tries to slow or stop something from moving. Friction causes heat. The frictional force you are most familiar with is probably the one generated when you rub your hands together to keep them warm. It happens whenever two objects slide against one another. Other examples of friction include:

Normal force is the name for the force that keeps objects in place when they are resting on an object that is stable. It is the type of force that a surface, such as a shelf or a floor, exerts on an object that is resting on it. A book that is laying flat on a desk is kept in place due to the normal force exerted by the desk. No force would be exerted if the book was not in contact with the desk, so this is a contact force. Other examples include:

A spring is an elastic object that stores mechanical energy, such as a coiled spring or rubber band. Spring force is the force created when an external force causes a spring to change its shape. When the force is removed, the spring goes back to its ordinary shape. If you've ever used a click top ink pen, you have seen spring force at work. Click the button on the top of the pen to release the writing tip, then click it again to hide it away. This action is linked to a coiled spring inside the cap of the pen. Other situations where spring force is created include:

Tension is a pulling force. It occurs when objects like wires, ropes, cables, or rods are pulled tightly from both ends. The tighter the object is being pulled in opposite directions, the greater the tension is. Applying too much tension can cause the object to break. Playing tug of war is an example of a situation in which tension force is applied to a rope. Other situations where tension force can be seen include:

Reviewing practical examples of science at work can provide context for the information taught in science classes. Now that you have reviewed some contact force examples, take the time to learn about how physics impacts objects and processes in everyday life. Start by reviewing some common examples of non-contact forces. Then, discover balanced and unbalanced forces.