Couplets are easy to come by for the poetry lover because they're familiar with the use and placement of such literary devices. There are also many famed couplets found in poetry. For those who are not as involved with literature, breaking the word down helps to uncover the meaning. Get a clear definition of what a couplet is and the different types with examples. 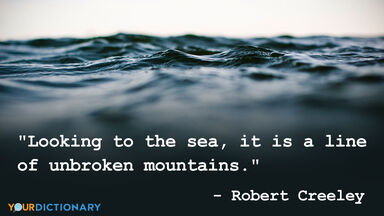 What Is a Couplet?

See the word couple in "couplet?" That is at least part of what a couplet is: a couple of lines. However, to the untrained eye, distinguishing a couplet from merely a couple of lines can be difficult. Couplets frequently rhyme and have the same length and rhythm or meter. Additionally, you can find different types of couplets.

In a closed couplet, the two lines are separated into sentences or complete thoughts but typically rhyme. An example of a closed couplet comes from Alexander Pope's "Eloisa to Abelard."

"Why rove my thoughts beyond this last retreat?
Why feels my heart its long-forgotten heat?"

An open couplet is where the first line runs into the second line. You can see this type of couplet in the next lines of Alexander Pope's "Eloisa to Abelard."

"Yet, yet I love!—From Abelard it came,
And Eloisa yet must kiss the name."

One of the most common types of couplets is the heroic couplet. These couplets follow Iambic pentameter like in William Shakespeare's "Sonnet 52."

"Blessed are you whose worthiness gives scope,
Being had, to triumph, being lacked, to hope."

When you look at a split couplet, they have an asymmetric rhythm. See an example in Richard Steere's "On a Sea-Storm Nigh the Coast." While the first line has five beats, the second line only has two.

"The weighty seas are rowled from the deeps
In mighty heaps,"

Other Types of Couplets

Many couplets can include multiple forms. For example, a couplet might be an open and heroic couplet. Now that you know a bit about couplets, check out a few famous examples.

Perhaps the best place to start when looking for couplets is with the famous couplets from William Shakespeare. He often ended a sonnet with a rhyming couplet that summed up the main theme of the poem.

In this couplet, Shakespeare summed up the theme of love's endurance.

"So, till the judgement that yourself arise,
You live in this, and dwell in lovers' eyes."

Unlike the theme of love and devotion, this sonnet is dark and depressing.

"Tir'd with all these, from these would I be gone,
Save that, to die, I leave my love alone."

Shakespeare dives into fear and jealousy in this sonnet.

"You still shall live, such virtue hath my pen,
Where breath most breathes, even in the mouths of men."

Love is a common theme in Shakespeare's work. It can be seen in this sonnet.

"How like Eve's apple doth thy beauty grow,
If thy sweet virtue answer not thy show!"

Shakespeare isn't the only writer from a bygone era who embraced the use of the couplet. Alexander Pope, an English writer and poet who lived from 1688-1744, was famous for his satirical verse and heroic couplets, which use rhyming iambic pentameter.

An Essay on Criticism

Pope's poem "An Essay on Criticism" is full of rhyming couplets. See an example of his famous style.

"Be not the first by whom the new are tried,
Nor yet the last to lay the old aside."

An Essay on Man: Epistle I

Pope liked to take on deep themes with his poems. In "An Essay on Man," Pope explored the universe's order and the hierarchy of humans.

"Hope springs eternal in the human breast:
Man never is, but always to be blest."

This couplet can be found in "Epistles to Several Persons: Epistle IV," which is one of four moral poems Pope created.

"'Tis education forms the common mind,
Just as the twig is bent, the tree's inclined."

There are plenty of other couplets in classic and current poetry too. Explore a few different examples of modern and classic couplets.

I Shall Forget You Presently, My Dear by Edna St. Vincent Millay

"Whether or not we find what we are seeking
is idle, biologically speaking."

Some modern poets and writers use couplets as well. For instance, children's author Shel Silverstein included some great examples of couplets in his poems.

"I have the measles and the mumps,
a gash, a rash and purple bumps."

While many couplets rhyme, they don't have to. You can find several examples laying around of couplets without rhyme.

Crazy Jane Talks with the Bishop by W. B. Yeats

Yeats's "Crazy Jane Talks with the Bishop" explores the feeling of coming out of sin. He also includes a non-rhyming couplet.

"I met the Bishop on the road
And much said he and I."

The Whip by Robert Creeley

Creeley created a poem made completely of couplets. However, there isn't one rhyme to be seen.

"I spent a night turning in bed,
my love was a feather, a flat"

The Innocence by Robert Creeley

The beginning of Robert Creeley's poem, "The Innocence," starts with a couplet.

"Looking to the sea, it is a line
of unbroken mountains."

Purpose of the Couplet

The couplet form is a popular device in poetry. The main purpose is to make a poignant point that leaves a lasting impression on the reader. Through the use of rhyme and rhythm in the couplets, that effect is generally achieved. However, Alexander Pope parodied the form when he wrote "An Essay on Criticism."

"Where-e'er you find 'the cooling western breeze,'
In the next line, it 'whispers through the trees;'
In crystal streams 'with pleasing murmurs creep,'
The readers threatened (not in vain) with 'sleep.'"

Pope is poking fun at his contemporaries for overusing the couplet. Like any literary device, if the couplet is used too frequently, it loses its effect and becomes mind-numbing rather than thought-provoking.

A Couple of Couplets

Couplets are common in poetry. They make a great rhyming theme in poetry and even literature. Ready for more couplets? Check out examples of rhyming couplets.