Before you begin writing, get inspired with critical analysis essay examples that go beyond simply fulfilling the assignment. These samples will show you how to write an essay that shows off your critical thinking skills, wows your teacher, and makes you proud. 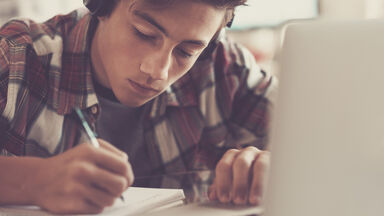 This short example essay offers a critical analysis of a famous advertising campaign by Procter & Gamble: “Thank You, Mom.” The ads, which ran during multiple Olympic seasons, targeted moms who buy the brands Procter & Gamble owns. This essay is effective because it uses specific evidence about the effectiveness of the ad campaign and has sources to back up the evidence. It’s also well organized with a clear thesis statement and good supporting details.

Procter & Gamble’s “Thank You, Mom” advertisements during the 2012 and 2014 Olympics featured mothers watching their children dream of becoming Olympic athletes. The ads show moms supporting their kids by making competition outfits, offering emotional reassurance, and providing protection against bullying. In the end of each ad, the now-grown children are competing in the Olympics as the mothers watch and cheer. This is an incredibly effective ad campaign because it speaks to the target audience for Procter & Gamble products and produces an emotional response.

To download a full PDF of this critical analysis essay example, click on the thumbnail of the essay. If you need help, take a look at this helpful guide to using Adobe printables.

This sample critical analysis essay offers an example of how to write this type of piece about a poem. You can use the same approach for a book, short story, play, or any other type of literature. This essay focuses on the the famous poem Ozymandias by Percy Byssche Shelley, and the thesis is that the poem is just as relevant today as it was when it was written. To prove the thesis, the essay uses details and quotes from the poem, as well as examples of similar behavior from famous people of today.

Percey Byssche Shelley’s famous sonnet, Ozymandias, was published in 1818, but the themes are still relevant today. In the poem, a speaker tells of a ruined statue of a great, forgotten ruler who had the hubris to believe his deeds would make him immortal in the eyes of history. Without overtly saying it, the poem asks whether today’s civilization and the deeds of ordinary people will also be forgotten as surely as this ancient emperor. Even more than 200 years later, the question is still a haunting and relevant one.

To read the entire essay in PDF form, click on the thumbnail image.

When it comes to critical analysis assignments, writing a great essay is about having a good thesis statement and then proving it in an organized way with details from the text or subject you are covering. Consider writing an outline first to make your essay easier to follow, and take some time to revise. If you do your best and take your time, you’ll have an essay you’ll be proud to turn in.