You may have heard of the Crusades of the Medieval period, but what were they? How long did the Crusades last, and why were they fought in the first place? Keep reading for a Crusades timeline that includes the major events and key historical leaders of these holy wars. 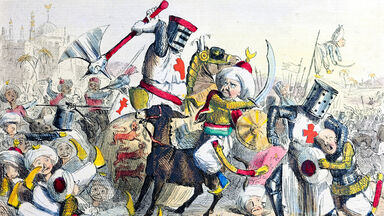 The Crusades for the Holy Land lasted nearly 200 years, taking place between 1096 and 1291. They were a series of religious wars between Christians and Muslims during the Middle Ages. All told, there were nine separate wars for control over the Holy Land (or Levant), ending in major power shifts, holy territory exchanges and over one million lives lost.

Historical Background of the Crusades

During the high Middle Ages, the spread of Islam coincided with the expansion of the Holy Roman Empire. Both religious forces had powerful militaries and a desire to control the Holy Land — namely, Jerusalem. The Holy Land had been under the control of the Roman Empire (then the Byzantine Empire) for over 500 years.

By the beginning of the 11th century, the Byzantine Empire controlled most of the Middle Eastern territory between the Catholic Church's control in Western Europe and the Muslim armies of central Asia. However, Seljuk Turks from Asia had been invading Byzantine countries for decades, taking over Persia, Armenia, Iraq, and eventually Jerusalem before 1070. In 1095, Emperor Alexius I of the Byzantine Empire petitioned for help against the Turks, and Pope Urban II declared the Holy Roman Empire's intention to take back the Holy Land at the 1095 Council of Clermont.

An army of Crusaders, mostly containing knights and European infantry, marched toward Asia Minor in 1096. By 1097, the Crusaders took Nicaea of the Holy Land from the Turks and later took Antioch in a bloody massacre. They reached Jerusalem in 1099, killed tens of thousands of citizens, and captured the city. The First Crusade ended in a victory for the Christians and the Holy Roman Empire, as Jerusalem was in their control. They established the Kingdom of Jerusalem to serve as the stronghold of the Latin Middle East.

Nearly 50 years later, the Crusaders rode once more against the Muslim Turks. The city of Edessa, which had previously been in Christian control, had been taken by the Muslims in 1144. Pope Eugenius III called for a second crusade a year later, and Conrad III (king of Germany) and Louis VII (king of France) took up the cross in 1147, meaning that they agreed to lead the Crusade. The Crusaders clashed with the Byzantine forces at Constantinople before being defeated by the Turks in Asia Minor. A poorly planned siege at Damascus ended the Second Crusade as a loss for the Christians.

The failure of the Second Crusade emboldened the Muslims against the Christians, who now seemed weak. A unified Muslim state led by Saladin, Sultan of Egypt, took Christian-held Jerusalem in 1187. Pope Gregory VIII called for the Third Crusade shortly afterward, and King Frederick I of Germany and the Holy Roman Empire, King Philip II of France, and King Richard I of England set off on what would be known as the Kings' Crusade. began two years later as an effort to take the city back.

Frederick I died shortly after the Crusade began, and Philip II returned to France in 1191, but Richard I successfully took the cities of Cyprus, Acre and Jaffa before returning to England in 1192. The Crusaders never reached Jerusalem, and it remained in Muslim control.

In another attempt to capture Jerusalem, Western Europe began the Fifth Crusade against the Muslims. The Crusade was again called by Pope Innocent III. Rather than go through Byzantium to the Holy Land, the Crusaders attempted to weaken Muslim forces by taking Damietta and Cairo from al-Kamil, Sultan of Egypt, first. After breaching Damietta in an extensive campaign, the Christians rejected Egypt's peace offer of control of Jerusalem and took Damietta instead. However, the campaign to take Cairo ended in defeat and still no control over Jerusalem.

Many historians consider the Sixth Crusade to be a continuation of the Fifth Crusade, as its aftermath achieved the goals of the previous (and unsuccessful) Crusade. Holy Roman Emperor Frederick II's marriage to Isabella II and the birth of son Conrad made him leader of the Kingdom of Jerusalem, the Christian holdings in the Latin Middle East, and gave him new inspiration to take back the city once and for all. His Crusaders marched on the Holy Land, and in 1229, Frederick II negotiated the Treaty of Jaffa. It gave Christians primary control of Jerusalem in exchange for the protection of Muslim interests and a 10-year truce.

Jerusalem was taken by the Khwarismians in 1244 in a violent siege, and the Christians also lost territory to Egyptian sultan al-Salih Ayyub. Pope Innocent IV called for the Seventh Crusade soon after, and King Louis IX of France began a well-funded (primarily from pillaging wealth and property from French Jews) campaign in 1248. When the Crusaders arrived in Egypt, they took Damietta but failed to progress past the city of Mansourah. Louis IX was captured during the Crusaders' surrender and released after paying a ransom and giving up the city of Damietta. It was the most expensive Crusade to date and ended with Muslims maintaining control over Jerusalem.

King Louis IX was not finished with the life of being a Crusader. After fortifying Christian strongholds in the Latin Middle East (primarily the city of Acre), he again set off in the Eighth Crusade to retake Jerusalem. This time, he would focus on Tunis as a more strategic place to attack Egypt and conquer Jerusalem. However, Louis IX and his son died of dysentery only a month into the campaign, and the Crusade was abandoned. Louis IX was later canonized as a saint for his devotion to the Church.

Often seen as the continuation of the Eighth Crusade, the Ninth Crusade (known as Lord Edward's Crusade) picked up a year later with Lord Edward of England, who had participated in the Eighth Crusade and would later become King Edward I. The Crusaders arrived in Acre to defend it from Baibars, the new Sultan of Egypt. Edward made it to the Holy Land and joined with Hugh, King of Jerusalem, to negotiate a truce for 10 years, 10 months and 10 days with Baibars, but no Christian reoccupation of the Holy Land. The final Crusade for the Holy Land was finished.

After the Ninth Crusade, the Christian-held city of Acre (the functioning capital of the Kingdom of Jerusalem) fell to the Egyptian army, known as the Mamluks. The siege brought much celebration to the Muslim world as the city was the only major presence of the Latin Middle East outside of Cyprus. With the fall of Acre, the Christians gave up any aims on Jerusalem. While future crusades in the 14th century blocked the advancing Turks from Roman territory, the Holy Roman Empire would never again try to take the Holy Land, later known as Palestine.

The nine official wars of the Crusades timeline were ordered and directed by political leaders, monarchs and popes throughout Europe. However, there was also a series of peasant crusades and movements of unrest that were inspired by the pro-Crusades rhetoric at the time. These crusades involved commoners who were driven by religious fervor, poverty and anger at their own monarchies to form armies that ranged from weakly untrained to violently anarchic.

The Clash of World Religions

The Crusades represent a period in world history where the two largest religions in the world competed for the same coveted space. They set the stage for religious discrimination for years to come, and one can still hear echoes of these devastating battles in our modern world. Learn more about the basic beliefs of world religions to understand the religious context of the Crusades, and why so many men, women and children were willing to die for their faith.