While people who follow the Gregorian calendar (so, most of the Western world) celebrate the new year on January 1, Jewish folks get an extra New Year in the form of Rosh Hashanah. The Jewish New Year is celebrated on the first day of Tishrei, the seventh month of the Hebrew calendar. This typically falls in September or October and marks the beginning of a 10-day festival ending in Yom Kippur. Even if you’re not Jewish, knowing how to greet your Jewish loved ones during Rosh Hashanah is always a great idea. 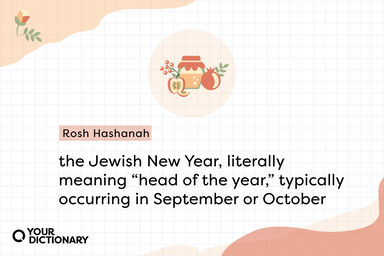 What Does “Rosh Hashanah” Mean?

Traditionally, Rosh Hashanah marks the anniversary of God’s creation of the world.

Unlike traditional New Year's celebrations, which tend to be full of fireworks, parties, and general raucousness, Rosh Hashanah is considered a contemplative, subdued holiday. Still, there’s plenty of joy and togetherness to be had, and the holiday greetings are a small part of that.

Chag sameach is a fairly versatile greeting that can be used on Rosh Hashanah and most other Jewish holidays. Chag sameach (pronounced “khahg sahm-ay-ahk”) is a Hebrew phrase meaning “happy festival.”

If it’s past noon on Rosh Hashanah, you can wish someone G'mar chatimah tovah (pronounced “guh-mar hah-tee-mah toh-VAH”). This greeting translates to “a good final sealing,” a reference to the inscription of your fate in the Book of Life and the sealing of that fate on Yom Kippur.

You may not be sure what to say during Rosh Hashanah, or you might be afraid of offending your Jewish friends with bad pronunciations. That’s totally fine because you can still show that you care with some simple English greetings.

“Happy new year” is a perfectly fine greeting for gentiles to say to their Jewish loved ones. You can also go with variations like “have a blessed new year” or “to a happy, healthy new year.” Just make sure that it is actually Rosh Hashanah when you say it.

It’s not how Jews greet each other during the holiday, but if you’re not sure what to say, “happy Rosh Hashanah” is a perfectly appropriate and kind way to show your Jewish friends some love and care. Again, make sure that it is actually Rosh Hashanah when you say it.

Along with greetings, take some time to learn about a bit of the history and traditions behind Rosh Hashanah.