Storms can be exciting and scary. Learn about two different types of storms with circular winds found on land and water. Get an overview of the key differences of a cyclone vs. tornado through an easy-to-follow chart. 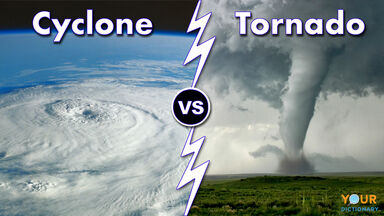 What Is the Difference Between a Cyclone and Tornado?

The weather is full of fun and memorable storms. When looking at different storms, especially those with rotating winds, it can be hard to know the difference between them — however, the key difference between a tornado and a cyclone is where and why it forms. A cyclone forms over water, while a tornado forms over land. Explore a quick guide to these powerful and destructive storms before checking out each type of storm in more depth.

Quick Guide to Cyclone vs. Tornado

See the significant differences between a cyclone and a tornado in action with a simple chart.

What Is a Cyclone?

While the term cyclone might sound weird, you are more familiar with this type of storm called a hurricane or a typhoon. Both a hurricane and a typhoon are types of cyclones. In general terms, you can think of a cyclone as an extensive weather system, measuring several hundred miles, where the winds rotate around an area of low pressure, known as the eye.

These large storms can build up for weeks and cause various levels of damage and destruction in their wake. For example, the strongest tropical cyclone on record was Typhoon Tip in 1979, which caused deaths, flooding and massive damage. However, while Typhoon Tip might have been the strongest, it wasn’t the deadliest cyclone.

Tropical cyclones form over warm tropical ocean waters when the warm, moist ocean air rises. They cause high winds, rain and destruction in their wake. Tropical cyclones are the most common and include different intensities.

Definition of a Subtropical Cyclone

When it comes to subtropical cyclones, they carry characteristics of both their cyclone cousins. However, these cyclones have less rain and can’t become a hurricane. To do that, they must become a tropical cyclone.

What Is a Tornado?

While cyclones typically form over water, tornadoes are more of a land storm. Also known as twisters, tornadoes form when a low and a high pressure meet in the atmosphere, causing a swirling vortex of spinning air. That air then creates a funnel that descends from the storm. In addition to destruction from the winds, tornadoes have torrential rains, hail and powerful thunderstorms. Registering at 2.6 miles, El Reno is the widest tornado on record. Happening in 2013, this monster swept through El Reno, OK.

While cyclones and tornadoes are different, they are both very destructive storms. Keep your exploration into weather patterns rolling by reading hurricanes vs. typhoons. You might be surprised to find out the only difference between these storms is where they happen.