What Is Declamation? Examples Throughout History

If a speech has ever stirred you to tears, anger or pure joy, you've likely heard a declamation. A declamation is a formal speech that includes rhetorical language, demonstrative gestures and forceful emphasis to get a speaker's point across. Declamations are used in dramatic oratory exercises and competitions, but they're also a common way to get an audience to believe what you say. 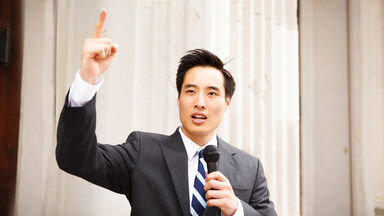 Any speech that's delivered with passion and strong emotion could be considered a declamation. Declamation examples would include Martin Luther King Jr.'s "I Have a Dream" speech and Abraham Lincoln's Gettysburg Address. Oration began in ancient times and will continue as long as people are fervent about their ideals.

I Have a Dream by Martin Luther King, Jr.

If you've ever seen a recording of Martin Luther King, Jr. speak publically, you know how inspiring he could be. Dr. King famously used declamatory techniques in his speeches for emphasis, especially in his 1963 "I Have a Dream" speech.

"And when this happens, when we allow freedom to ring, when we let it ring from every tenement and every hamlet, from every state and every city, we will be able to speed up that day when all of God's children, black men and white men, Jews and Gentiles, Protestants and Catholics, will be able to join hands and sing in the words of the old Negro spiritual, 'Free at last, free at last. Thank God Almighty, we are free at last.'"

The Gettysburg Address by Abraham Lincoln

Abraham Lincoln gave his Gettysburg Address at a turning point of the Civil War. With the future of the United States on his shoulders, President Lincoln paid an emotional tribute to the fallen soldiers of the Battle of Gettysburg.

"The world will little note, nor long remember what we say here, but it can never forget what they did here. It is for us the living, rather, to be dedicated here to the unfinished work which they who fought here have thus far so nobly advanced. It is rather for us to be here dedicated to the great task remaining before us — that from these honored dead we take increased devotion to that cause for which they gave the last full measure of devotion — that we here highly resolve that these dead shall not have died in vain — that this nation, under God, shall have a new birth of freedom — and that government of the people, by the people, for the people, shall not perish from the earth."

Max Ehrmann's poem "Desiderata" uses declarative sentences and evocative language to express its point clearly. When spoken as a declamation, it serves as a strong piece of life advice to its listeners.

"Go placidly amid the noise and haste, and remember what peace there may be in silence. As far as possible, without surrender, be on good terms with all persons. Speak your truth quietly and clearly; and listen to others, even to the dull and ignorant; they too have their story. Avoid loud and aggressive persons, they are vexations to the spirit. If you compare yourself with others, you may become vain and bitter, for always there will be greater and lesser persons than yourself. Enjoy your achievements as well as your plans."

Their Finest Hour by Winston Churchill

Winston Churchill faced an unwinnable situation during World War II. He could either allow Adolf Hitler's forces to invade Britain like so many other nations, or he could inspire his beleaguered troops to keep fighting. Churchill chose the latter in his famous speech, "Their Finest Hour."

"Hitler knows that he will have to break us in this Island or lose the war. If we can stand up to him, all Europe may be free and the life of the world may move forward into broad, sunlit uplands. But if we fail, then the whole world, including the United States, including all that we have known and cared for, will sink into the abyss of a new Dark Age made more sinister, and perhaps more protracted, by the lights of perverted science. Let us therefore brace ourselves to our duties, and so bear ourselves that, if the British Empire and its Commonwealth last for a thousand years, men will still say, 'This was their finest hour.'"

In 1942, India was still under British rule and facing increasing protests from its citizens. Only a forceful, rhetorical appeal in Mahatma Gandhi's "Quit India" speech could support his call for nonviolent resistance.

"As a matter of fact, I feel myself to be a greater friend of the British now than ever before. One reason is that they are today in distress. My very friendship, therefore, demands that I should try to save them from their mistakes. As I view the situation, they are on the brink of an abyss. It, therefore, becomes my duty to warn them of their danger even though it may, for the time being, anger them to the point of cutting off the friendly hand that is stretched out to help them. People may laugh, nevertheless that is my claim. At a time when I may have to launch the biggest struggle of my life, I may not harbour hatred against anybody."

Declamation can also be a slogan, such as "Fur is Dead" to protest the wearing of animal fur. It could be a sentence, taken alone or from a speech, like Patrick Henry's "Give me liberty or give me death" or "Remember the Alamo."

Other famous quotes that can be considered declamations are:

When a president takes office in the United States, they make a speech to the nation called the inaugural address. These declamations represent an incoming president's vision for the country's future as well as their passion for the job.

In 1981, Ronald Reagan was the first president to take part in an inauguration ceremony on a terrace in the west front of the Capitol. His inaugural speech included the following declamation example:

"You and I, as individuals, can, by borrowing, live beyond our means, but for only a limited period of time. Why, then, should we think that collectively, as a nation, we are not bound by that same limitation? We must act today in order to preserve tomorrow. And let there be no misunderstanding -- we are going to begin to act, beginning today."

John F. Kennedy is an American icon. His inaugural address was also considered to be a fantastic declamation.

"Finally, whether you are citizens of America or citizens of the world, ask of us here the same high standards of strength and sacrifice which we ask of you. With a good conscience our only sure reward, with history the final judge of our deeds, let us go forth to lead the land we love, asking His blessing and His help, but knowing that here on earth, God's work must truly be our own."

Barack Obama is considered a skilled orator and his inaugural address did not disappoint. He uses repetition and emotional language to implore his point.

"That we are in the midst of crisis is now well understood. Our nation is at war against a far-reaching network of violence and hatred. Our economy is badly weakened, a consequence of greed and irresponsibility on the part of some, but also our collective failure to make hard choices and prepare the nation for a new age. Homes have been lost, jobs shed, businesses shuttered. Our health care is too costly, our schools fail too many — and each day brings further evidence that the ways we use energy strengthen our adversaries and threaten our planet. These are the indicators of crisis, subject to data and statistics. Less measurable, but no less profound, is a sapping of confidence across our land; a nagging fear that America's decline is inevitable, that the next generation must lower its sights. Today I say to you that the challenges we face are real. They are serious and they are many. They will not be met easily or in a short span of time. But know this America: They will be met."

No one can deny literature is an emotional form of art. Poets, playwrights and novelists alike are capable of pouring emotion into the written word. Consider these three examples from a master painter of words, William Shakespeare.

Is it time to deliver an informative or persuasive speech to your teacher and classmates? Don't let the fear of public speaking bog you down. Turn the focus away from yourself and onto the message you're excited to share.

With your topic in mind, here are a few tips that'll help you structure and deliver your next declamation:

Be Emotional, Be Real

When people think of public speaking, they usually think of buttoned-up precision and professional formality. Some occasions in life call for emotional strength and transparency, however. In fact, even the most professional forums may leave room for small emotional appeals. Use these tips to write your next declamation: