A formal definition essay defines a term or concept. Definition essays are a form of expository writing in which the writer provides information about the term to their audience. They typically follow a standard essay format and include both a definition and an analysis of the term. Review the example essays below and try exploring some of the suggested essay topics, too. 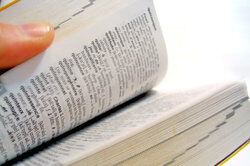 close up of dictionary pages
Advertisement

You can follow the general structure for an expository essay when writing a definition essay. While the basic pieces of the essay are the same, definition essays should include some key elements.

You know the feeling: you’re reading a website or streaming a movie when your Wi-Fi goes out. What is Wi-Fi, and why do we depend on it so much? Understanding the concept of Wi-Fi is important for users of modern technology because it connects us to the world.

Wi-Fi is the wireless local network between nearby devices, such as wireless routers, computers, smartphones, tablets, or external drives. It is part of the LAN (local area network) protocols and has largely replaced the wired Ethernet option. When your device has Wi-Fi turned on, it can find the nearest router. If the router is connected to a modem and works with an Internet service provider (ISP), your device can now access the Internet and other devices on the network. Wi-Fi covers a much more limited area than a cell phone tower. However, Wi-Fi does not use expensive cellular data like LTE or 4G.

Many people believe that Wi-Fi is short for “wireless fidelity.” The founding members of Wireless Ethernet Compatibility Alliance needed a name that was easier to remember than “wireless ethernet,” and much easier than Wi-Fi’s actual original name, “IEEE 802.11b Direct Sequence.” They added the slogan “The Standard for Wireless Fidelity,” but dropped it after people mistook the meaning of Wi-Fi. The name is a play on the term “hi-fi,” which is a high-quality reproduction in stereo sound (“high fidelity”), and not related to Wi-Fi at all. The IEEE 802.11b standard has since been upgraded to faster protocols, including 802.11g, 802.11n and 802.11ac.

Because of Wi-Fi’s widespread use and popularity, Merriam-Webster added “Wi-Fi” to its dictionary in 2005, only eight years after it was invented. Today, most modern computers depend on Wi-Fi for Internet access. Free Wi-Fi is available in many restaurants, hotels, and coffee shops. It is also easy to install in your home for private use. However, even private Wi-Fi connections should be password-protected. Joining an unprotected Wi-Fi network, or allowing others to join your network, could compromise your online safety and privacy.

Understanding what Wi-Fi really is can protect you and your information. When used correctly and safely, Wi-Fi is an essential part of the 21st-century experience. Whether you’re watching your favorite show or finishing up a research paper, you should know more about how data travels to and from your device.

Everyone feels afraid from time to time. From feeling the jitters to facing a lifelong phobia, it’s difficult to put fears aside when trying to accomplish a goal. But, one doesn’t need to forget that they are afraid in order to be brave; in fact, bravery doesn’t exist without real fear behind it.

Bravery is the mindset one takes when facing a challenge that could be dangerous or difficult. The task could be objectively dangerous, such as engaging in battle or driving in adverse conditions. A person could also perceive a seemingly harmless situation as challenging, such as climbing a flight of stairs or talking to someone they’d like to date. A brave act requires one to face and embrace the task rather than withdraw from it.

There are examples of bravery in every community. Look no farther than your local fire station or police station to see acts of bravery. Community heroes help others in small and large ways every day, often at great risk to their own lives. Students are brave when they stand up to a bully or present a project in front of the whole class. Practicing small acts of bravery can prepare a person to lead a heroic life.

“Fearlessness” can be a connotation of bravery, but it’s not a true synonym (although bystanders may believe that a brave person acts without fear). If a task does not seem frightening in some way, it would be simple to complete, requiring no bravery at all. Heroes who exhibit bravery often put themselves at risk to help others. The closest synonym for bravery would be “courage.” The ability to do what’s right despite a real or perceived threat requires strength, making “fortitude” another near-synonym for bravery.

Bravery doesn’t exist without fear. No matter how challenging or dangerous a task can be, bravery allows a person to work alongside their fear rather than forget about it. The next time you see someone acting heroically, remind yourself that they are probably terrified in that moment – and that makes them even braver.

You just need to ask a question when finding a prompt for a definition essay. Here are some possible topics for your next definition essay. Note that the list includes both concrete and abstract terms and spans a range of subjects.

Now that you’ve got the definition essay down, take a look at more writing resources. Get some tips on writing essays or read additional examples of different essay types. If your writing is getting a bit long, learn how to write clear, concise sentences.