Descriptive essays are a powerful way to communicate an experience you've had or illustrate a subject in which you have expertise. Whether you plan to write a personal, subjective account or a more rigorous description of a given subject, these descriptive essay examples will guide you to success. 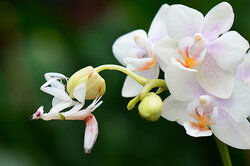 We suggest you read our guide on how to write an essay as well. Essays are all about learning to express yourself within the structures provided. We can help with that.

The following is a short example of a classic personal essay. It relates a subjective experience the writer had in vivid language, allowing the reader to experience it vicariously.

I watched a thunderstorm, far out over the sea. It began quietly, and with nothing visible except tall dark clouds and a rolling tide. There was just a soft murmur of thunder as I watched the horizon from my balcony. Over the next few minutes, the clouds closed and reflected lightning set the rippling ocean aglow. The thunderheads had covered up the sun, shadowing the vista. It was peaceful for a long time.

I was looking up when the first clear thunderbolt struck. It blazed against the sky and sea; I could see its shape in perfect reverse colors when I blinked. More followed. The thunder rumbled and stuttered as if it could hardly keep up. There were openings in the cloud now, as if the sky were torn, and spots of brilliant blue shone above the shadowed sea.

I looked down then, watching the waves. Every bolt was answered by a moment of spreading light on the surface. The waves were getting rough, rising high and crashing hard enough that I could hear them.

Then came the rain. It came all at once and in sheets, soaking the sand, filling the sea. It was so dense I could only see the lightning as flashes of light. It came down so hard the thunder was drowned. Everything was rhythmic light and shadow, noise and silence, blending into a single experience of all five senses.

In an instant it stopped. The storm broke. The clouds came apart like curtains. The rain still fell, but softly now. It was as if there had never been a storm at all, except for a single signature. A rainbow, almost violently bright, spread above and across the water. I could see the horizon again.

The following is a formal description. The writer describes a subject of which they have extensive knowledge.

Hymenopus coronatus, the orchid mantis, is a remarkable creature. Against any opponent but a careful entomologist with a cardboard box, the mantis is a lethal hunter and master of camouflage. Its four front legs, head and thorax are covered in delicate structures resembling colorful flower petals. In appearance, it looks like nothing so much as a praying mantis covered in beautiful painted fans.

As for its behavior, like any good mantis, it is an ambush predator. It takes full advantage of its unique appearance, settling amongst the petals of orchids and awaiting visiting insects. It favors butterflies and moths for its meals, but will happily take any insect on offer. Indeed, it need not even be an insect: particularly voracious orchid mantises have been known to feed on small lizards, frogs, mice and even birds.

Its behavior among its own kind is no different. Like many mantises, orchid mantises are opportunistic cannibals. They don't go out of their way to devour their own kind, but should one stray into striking range of another when it's feeling peckish, it may well become a meal. H. coronatus is not recorded as performing the praying mantis's infamous reproductive cannibalism, however.

Its relationship to humans is neutral, verging on positive. H. coronatus is not an ally of the committed gardener like the aphid-devouring ladybug, but it will nibble on any pests that present themselves. Aside from that, the orchid mantis is only valuable to humans for its extraordinary beauty.

Hymenopus coronatus is an example of a unique form of beauty that exists only in nature, careless of human judgment, designed for function rather than form, but still capable of making an observer catch their breath at its strange loveliness.

What Is a Descriptive Essay?

The first approach is the personal essay. This has much in common with the narrative essay, relating an experience in terms of the writer's own feelings and responses.

This can be engaging for empathetic readers, but can also be vague and disorganized. To write a successful personal essay, it's important to focus and relay only the aspects that most fully express your experience. Personal essays also benefit from vivid, evocative language.

A few examples of personal essay topics might be:

Rather than focusing on the writer's experience, the formal descriptive essay relates specific categories of information in order to provide the fullest possible portrait. This approach can also be engaging, especially when the reader is more curious about the subject of the essay than the writer's response to it. Done wrong, however, it can be stilted and boring.

Topics for formal descriptions could include:

The Power of Description

Descriptive essays break the structured, formal approach used in more conventional academic writing, allowing the author to speak from personal experience. This is both a great opportunity and a risk. Being too personal risks seeming silly or overdramatic; too impersonal and things get boring. The art of the descriptive essay is striking the balance between the two.

For even more essay help from YourDictionary, cast your eyes to our tips on writing a personal narrative essay. Happy reading!