Descriptive poetry, unlike narrative poetry, is known not necessarily for telling a story but for its deep depiction of a person, animal or inanimate object. The feelings the poet has about this object are secondary to the description of the subject, so they don't get in the way of the visual imagery. Peruse an assorted array of descriptive poem examples. 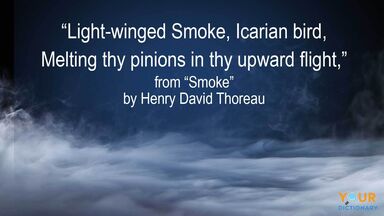 Poetry can take various forms but always expresses a message in a unique way, often with rhythm or rhyme. However, some of the most intensely expressive poetry is highly descriptive and uses language that creates images and feelings beyond that of other literary works. Explore examples of famous descriptive poets known for their rich vocabulary and the imagery they produce within their written work.

One such poet is Henry David Thoreau, a transcendentalist author and poet whose work was highly descriptive. In “Smoke,” Thoreau's description of smoke is intense and creates a vivid picture in the reader's mind with metaphors that compare the smoke to an Icarian bird or incense. Other descriptions such a star-veiling and shadowy allow readers to compose images of their own of how the smoke must have appeared to Thoreau as he wrote this piece.

"Light-winged Smoke, Icarian bird,
Melting thy pinions in thy upward flight,
Lark without song, and messenger of dawn,
Circling above the hamlets as thy nest;
Or else, departing dream, and shadowy form
Of midnight vision, gathering up thy skirts;
By night star-veiling, and by day
Darkening the light and blotting out the sun;
Go thou my incense upward from this hearth,
And ask the gods to pardon this clear flame."

Midnight and Moonlight by Kelly Roper

LoveToKnow contributing writer Kelly Roper is also an adept writer of descriptive poems. Consider this first poem evoking imagery of the pale moonlight against the darkness of midnight.

"Her hair as dark as midnight
Sleek and wavy, trailing down.
Her skin as pale as moonlight
Projects a silvery glow all around.
The night so cool and quiet,
As the stars twinkle in the sky.
And all of nature stands in awe,
As this beauty passes by."

Quenching My Thirst by Kelly Roper

In this second poem, the description extends well beyond visual elements for a more visceral feel of a bodily sensation. As you dive into the words, you can feel just how parched they feel by the vivid comparisons to sticks and putty.

"That terrible, dry-throated feeling
With tongue so parched it sticks
To the roof of my mouth like putty.
Nothing there to swallow but air.
Then the lovely tinkling of ice
Falling into a glass,
And the steady fizzing sound
Of a stream of soda pouring.
The soothing feel of cold
Glass against my lips.
The blessed wetness
Bathing lips, tongue, and throat."

A Bird, Came Down the Walk by Emily Dickinson

Follow Emily Dickinson’s description of a bird in the yard. Through her use of imagery and literary devices, you can clearly follow the blight of the bird.

"A Bird, came down the Walk -
He did not know I saw -
He bit an Angle Worm in halves
And ate the fellow, raw,

And then, he drank a Dew
From a convenient Grass -
And then hopped sidewise to the Wall
To let a Beetle pass -"

In his poem “I Wandered Lonely as a Cloud,” you can imagine how the person moves along the hills, and the daffodils move in the breeze. Follow this journey through William Wordsworth’s words.

"I wandered lonely as a cloud
That floats on high o'er vales and hills,
When all at once I saw a crowd,
A host, of golden daffodils;
Beside the lake, beneath the trees,
Fluttering and dancing in the breeze.

Continuous as the stars that shine
And twinkle on the milky way,
They stretched in never-ending line
Along the margin of a bay:
Ten thousand saw I at a glance,
Tossing their heads in sprightly dance."

Out, Out— by Robert Frost

Robert Frost weaves a tale of woe through his descriptive poem about an accident with a saw. As you read “Out, Out,” you can almost hear the movement of the saw as it snarled and rattled.

When You Are Old by William Butler Yeats

"When You Are Old" accurately depicts the regret a young person might feel for not embracing love as they age. William Yeats uses vivid imagery to paint the picture of the pining older woman might feel for the man she didn't accept.

"When you are old and grey and full of sleep,
And nodding by the fire, take down this book,
And slowly read, and dream of the soft look
Your eyes had once, and of their shadows deep;

How many loved your moments of glad grace,
And loved your beauty with love false or true,
But one man loved the pilgrim soul in you,
And loved the sorrows of your changing face;"

A Way With Words Through Descriptive Poems

Descriptive poetry is literary work that displays the talent of those whose rich vocabularies, adept writing skills and vivid imaginations come together to create masterpieces such as the ones of Wordsworth, Dickinson, Thoreau, and others. Don’t let your excitement about poetry end here; check out 25 narrative poem examples to keep yourself engrossed in the world of poetry.