The way you speak is considered your dialect. It can vary depending on your culture, where you were raised, whether you speak another language, or any other number of factors. Authors often use eye dialect, or nonstandard spelling and phrases in writing, to convey a character’s speech patterns. Eye dialect is effective in literature when the writer uses it for a specific purpose, such as characterization or establishing a setting. 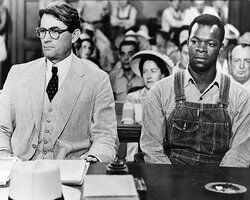 Gregory Peck and Brock Peters in To Kill a Mockingbird.
Advertisement

Examples of Dialect to Establish Character

Sometimes a character has a different dialect than those around them. Having a unique dialect can make that character more interesting compared to their surroundings. Here are some examples of novels that use standard English in their third-person narration, but eye dialect in their characters’ dialogue.

Eliza’s dialect makes her line difficult to read. It translates to standard English as, “Oh, he’s your son, is he? Well, if you’d done your duty as a mother should, he’d know better than to spoil a poor girl’s flowers, then run away without paying. Will you pay me for them?” Shaw notes in his stage direction:

Here, with apologies, this desperate attempt to represent her dialect without a phonetic alphabet must be abandoned as unintelligible outside London.

Eliza’s dialogue is written in more standard English in subsequent lines, but this line exists to establish how incomprehensible her accent can be. The majority of the play’s characters, including Higgins, speak with standard English to contrast Eliza’s dialect. Higgins takes on the task of changing Eliza’s speech and therefore her social station, reinforcing the importance of one’s dialect as a character trait.

Harper Lee’s To Kill a Mockingbird is told from an older Scout’s point of view as she recounts summers from her childhood. While her adult narration is poetic and sophisticated, young Scout, Jem, and her friends speak with a childlike dialect that is distinct to Lee’s Alabama hometown. This is one of the better known regional dialect examples from American literature.

In this excerpt, Jem quizzes new neighbor Dill about his age:

“Shoot no wonder, then,” said Jem, jerking his thumb at me. “Scout yonder’s been readin‘ ever since she was born, and she ain’t even started to school yet. You look right puny for goin’ on seven.”

The boys’ accent is easy to hear through various phrasing and spelling changes. Because the town of Maycomb is such an important element of the novel and of Scout’s development, its reflection in the characters’ dialect is an effective stylistic choice.

Nearly every character in Larry McMurtry’s Lonesome Dove has a distinct dialect from various areas of the American West. But leisure-loving Augustus ”Gus” McRae infuses a humorous perspective and folksy expressions into his dialogue. His dialect contrasts sharply with the book’s lyrical narration.

“I god, Pea,” Augustus said. “Of course he found a few here and there. They used to be thicker than grass burrs, if you remember. I’ll guarantee he won’t scratch up none tonight. Call’s got to be the one to out-suffer everybody, that’s the pint. I won’t say he’s a man to hunt glory like some I’ve knowed. Glory don’t interest Call. He’s just got to do his duty nine times over or he don’t sleep good.”

As Gus explains the motivations of his long-suffering friend, Captain Call, the reader can “hear” his Texas accent through nonstandard spelling and regional slang. His exasperated expression “I god” (instead of the standard colloquialism “my God”) appears dozens of times throughout the novel.

Books that transition between languages include excellent examples of dialect. The Joy Luck Club by Amy Tan uses language as a barrier between generations. In this excerpt, young Jing-Mei faces off with her mother about becoming a prodigy.

"So ungrateful," I heard her mutter in Chinese. "If she had as much talent as she has temper, she would be famous now. "

Note the contrast between Jing-Mei’s mother’s dialects when she speaks in English versus her native Chinese. Her short, broken sentences underscore the frustration in her words, while the longer Chinese sentences reflect a more thorough statement. This contrast becomes a source of division between each mother and daughter throughout the novel.

Examples of Dialect to Establish Setting

Dialect can be an effective way to bring a reader into the characters’ world. These stories typically include characters with very similar dialects. They are typically told in the first first-person perspective, though some bold stories may carry a dialect into a third-person narration.

One of the most enduring examples of a story told in regional dialect is Mark Twain’s Adventures of Huckleberry Finn. In one of the most famous examples of dialect in children’s literature, Twain famously weaves several different dialects throughout the story, as explained in his preface.

But as the narrator, Huck Finn himself carries a distinct dialect throughout the entire story. Here, Huck describes a conversation in which he tells Miss Watson he’d prefer “the bad place” (hell) to sitting through a spelling lesson with her.

All I wanted was to go somewheres; all I wanted was a change, I warn’t particular. She said it was wicked to say what I said; said she wouldn’t say it for the whole world; she was going to live so as to go to the good place. Well, I couldn’t see no advantage in going where she was going, so I made up my mind I wouldn’t try for it. But I never said so, because it would only make trouble, and wouldn’t do no good.

Huck’s restless, boyish perspective carries the reader through his adventures. Twain limits eye dialect in this case, as too much nonstandard phrasing could be distracting in the long term. However, when Jim speaks, his dialect as a Southern slave is much more distinctive:

“Say, who is you? Whar is you? Dog my cats ef I didn’ hear sumf’n. Well, I know what I’s gwyne to do: I’s gwyne to set down here and listen tell I hears it agin.”

Jim’s dialect represents speech that Twain describes as the “Missouri negro dialect.” The vernacular was popular in literature such as Gone with the Wind by Margaret Mitchell and Uncle Tom’s Cabin by Harriet Beecher Stowe. However, it can be considered stereotypical and racist in modern society.

Celie’s messages to God make up the format of Alice Walker’s The Color Purple. Her dialect is marked by nonstandard spelling to show her regional accent, her youth, and her lack of education. Read a quote in which Celie sees her daughter, who was taken from her shortly after birth.

I think she mine. My heart say she mine. But I don’t know she mine. If she mine, her name Olivia. I embroder Olivia in the sea of all her daidies. I embrody lots of little stars and flowers too. He took the daidies when he took her. She was bout two month old. Now she bout six.

Walker removes contractions and other forms of “is” to mark Celie’s dialect. Another nonstandard spelling, “embrody” (embroider), demonstrates the way Celie speaks.

Frank McCourt’s Angela’s Ashes is as much a story about Ireland as it is about his childhood. The lilt of an Irish accent is evident throughout Frank’s first-person narration and in the other Irish characters of the story.

There's a knock at the door, Mr. MacAdorey. Och, Malachy, for God's sake, it's three in the morning. You have the whole house woke with the singing.

Och, Dan, I'm only teaching the boys to die for Ireland.

You can teach them to die for Ireland in the daytime, Malachy.

I know, Malachy, but they're only children. Babies. You go to bed now like a dacent man.

McCourt’s use of nonstandard spelling like “Och” and “dacent” gives the novel a distinctly Irish feel. When read phonetically, the reader can detect traces of the accent that each character shares.

Only the Dead Know Brooklyn

A lesser-known example of dialect that establishes setting is from the 1935 short story “Only the Dead Know Brooklyn” by Thomas Wolfe. Nearly every word is written with nonstandard spelling to capture a Brooklyn accent.

Words like “befoeh” and “toity-sixt” may seem daunting until you read them out loud. Then you’ll discover that they mean “before” and “thirty-sixth.” Each seemingly strange word helps the story encapsulates the ups and down of the regional dialect of 1930s Brooklyn.

While your dialect can be shared by others raised in the same area, your idiolect represents a speech pattern that is yours alone. It includes your dialect as well as your life experiences, allusions, preferences, sayings, verbal tics, and any other element of your speech. Every person – and literary character – has a unique idiolect.

James Joyce, a master of distinctive diction, creates an idiolect for the speaker of his novel Finnegan’s Wake. Known as his most challenging work, the book infuses dozens of languages, references, nonsense words, and even the longest word found in literature into its narration.

The fall (bababadalgharaghtakamminarronnkonnbronntonnerronntuonnthunntrovarrhounawnskawntoohoohoordenenthurnuk!) of a once wallstrait oldparr is retaled early in bed and later on life down through all christian minstrelsy. The great fall of the offwall entailed at such short notice the pftjschute of Finnegan, erse solid man, that the humptyhillhead of humself prumptly sends an unquiring one well to the west in quest of his tumptytumtoes: and their upturnpikepointandplace is at the knock out in the park where oranges have been laid to rust upon the green since devlinsfirst loved livvy.

The idiolect here includes Christian gospel (or “mistrelsy”), several brand-new words, lots of nonstandard spelling, and clever turns of phrase common to Joyce’s writing (“laid to rust” rather than “laid to rest”).

Joyce’s previous works, such as A Portrait of the Artist as a Young Man and Ulysses, use language and dialect to firmly establish Ireland as their setting. But the idiolect Joyce created for Finnegan’s Wake is so unique that it is regarded as almost untranslatable to other languages.

It’s easy to consider dialect and diction to be the same concept. They both describe the way a person or character speaks, and they can both tell you a lot about the speaker. But the difference is important to understand:

While you're on the subject, you may want to also learn the difference between dialect vs. accent.

If you’re ready to include diction in your writing, check out a handy Cockney translator or list of “redneck” words. Write out some of your own dialectical patterns, as well. It’s always easier to write what you know!