When a writer chooses words that make their writing sound a certain way, they’re choosing their diction. In English, each word has a slightly different meaning and evokes different senses and emotions. Choosing the right words for your purposes determines what diction you are using. Keep reading to learn more about formal vs. informal diction with several diction examples. 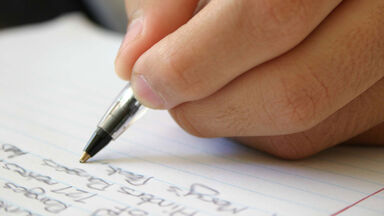 Diction is a writer or speaker's word choice that helps define the written or spoken word and expresses personal style. Consider the dictionary – a book full of word choices. There are two main types of diction that a writer uses to establish their voice and message. These types are:

Though diction is highly personal, it's also important to remember your audience when choosing an appropriate style. Consider the examples below to help you understand the way diction changes the writer's message.

The rules of grammar ensure that your writing is understandable. However, within the general framework of the English language, you can also choose to write formally or informally. There are different degrees of formality in writing, and these range from highly formal research papers to quick texts you might send to a friend.

Formal diction involves choosing descriptive, precise words that are polite and proper. Sentences in formal diction are often longer. Informal diction, on the other hand, often assumes that the audience already knows what you're talking about and generally uses shorter words. Sentences may be incomplete or ignore some finer points of grammar and usage.

Examples of Formal vs. Informal Diction

To get a sense of how formal and informal diction affects the message, consider these greetings:

In the first example, the speaker uses longer words such as "pleasure" and "acquaintance" as well as longer sentences. By contrast, the informal speaker uses monosyllabic words like "kid", slang like "ya" and very short sentences. Though both examples convey the same information, they do so with different levels of formality.

As a reader, you can tell the difference between the formal examples and informal examples. Using the correct diction sets the right tone for an audience and makes your message clear.

Going to Extremes With Diction

Formal writing can go to extremes when writers use pedantic diction. Pedantic diction is very detailed and usually includes industry jargon, often in formal writing. Jargon includes highly technical language or specialized terms that only people in a certain group or industry understand. For example, consider this job description:

The candidate must be adept at both the latest communications technology and heritage voice systems to keep all stakeholders informed of developing trends in the workspace.

Could you tell that the paragraph above is looking for a secretary? The overly complex terms like "communications technology" and "heritage voice systems" are jargon, and these words often obscure meaning instead of making things clear. However, to people in the industry, the description is perfectly understandable.

On the opposite end of the formality spectrum is colloquial diction. Colloquial language is highly informal and may include regional expressions and spellings that reflect dialect and non-standard pronunciations. For example:

The first sentence is highly informal, and it assumes that the reader understands that the hen is hot not just because it's summer, but because she's likely to end up in the soup pot for Sunday dinner as part of rural tradition. It’s an effective way to make a character sound more relatable and interesting. In fiction, colloquialisms can help writers develop characters that talk like real people.

Like jargon and colloquial writing, slang can exclude some readers from understanding your point. It's important to consider your audience before you begin to write. If you are writing for a small group of people who all know your terminology, jargon, colloquialisms, or slang may be appropriate.

Examples of Formal Diction in Literature

Diction sets the tone so if the diction used is formal the whole tone of the writing is formal. This can give a sense of seriousness, power or even artistic effect, as in these examples.

The first few lines from Pride and Prejudice set a formal scene. Its long sentences and elevated vocabulary communicate that the rest of the book will have proper, formal diction.

"It is a truth universally acknowledged, that a single man in possession of a good fortune must be in want of a wife. However little known the feelings or views of such a man may be on his first entering a neighborhood, this truth is so well fixed in the minds of the surrounding families, that he is considered as the rightful property of some one or other of their daughters."

Despite Shakespearean diction’s colloquial influence on the modern English language, it is still quite formal. Its long words and sophisticated sentence structure makes the language in Hamlet both beautiful to hear and meaningful to understand.

"What a piece of work is a man! How noble in reason, how infinite in faculty! In form and moving how express and admirable! In action how like an Angel! In apprehension how like a god! The beauty of the world! The paragon of animals! And yet to me, what is this quintessence of dust? Man delights not me; no, nor Woman neither; though by your smiling you seem to say so."

Heart of Darkness describes the utter horror of humanity in its barest form. Conrad’s formal diction describes scenes in a very precise and beautiful way – contrasting the harsh reality of the plot effectively.

"The sun set; the dusk fell on the stream, and lights began to appear along the shore. The Chapman lighthouse, a three-legged thing erect on a mud-flat, shone strongly. Lights of ships moved in the fairway-a great stir of lights going up and going down. And farther west on the upper reaches the place of the monstrous town was still marked ominously on the sky, a brooding gloom in sunshine, a lurid glare under the stars." Heart of Darkness, Joseph Conrad

Examples of Informal Diction in Literature

Using informal diction, including slang and colloquialisms, gives writing a lighter tone, making the piece more down to earth and less lofty. Notice how these diction examples from literature also use colloquial diction to establish where their characters are from.

The Adventures of Huckleberry Finn

Mark Twain’s use of words like “light out” and “sivilize” establishes Huck as a Southern boy with a bit of an attitude. His informal, colloquial dialect does much of the characterization work for him.

"But I reckon I got to light out for the territory ahead of the rest, because Aunt Sally she's going to adopt me and sivilize me, and I can't stand it. I been there before."
The Adventures of Huckleberry Finn, Mark Twain

The Catcher in the Rye

Holden Caulfield, the protagonist of The Catcher in the Rye, speaks like an educated teenager. He sounds like a real person who interrupts himself and tries his best to communicate his ideas. Holden also uses some slang diction, including “crazy cliff” and “and all.”

"Anyway, I keep picturing all these little kids playing some game in this big field of rye and all. Thousands of little kids, and nobody's around – nobody big, I mean – except me. And I'm standing on the edge of some crazy cliff. What I have to do, I have to catch everybody if they start to go over the cliff – I mean if they're running and they don't look where they're going I have to come out from somewhere and catch them. That's all I do all day. I'd just be the catcher in the rye and all. I know it's crazy, but that's the only thing I'd really like to be."

The Catcher in the Rye, J. D. Salinger

Their Eyes Were Watching God

"Sometimes God gits familiar wid us womenfolks too and talks His inside business. He told me how surprised He was 'bout y'all turning out so smart after Him makin' yuh different; and how surprised y'all is goin' tuh be if you ever find out you don't know half as much 'bout us as you think you do. It's so easy to make yo'self out God Almighty when you ain't got nothin' tuh strain against but women and chickens."

When you let your audience guide your diction, you're more likely to communicate your ideas effectively. Academic writing requires careful attention to grammar and use of precise vocabulary so that your meaning is clear. Save slang terms and other informal expressions for emails, texts to friends or telling a story face to face. For more ways to describe diction, check out a list of strong words that describe diction.