Difference Between Atoms and Elements (With Examples) 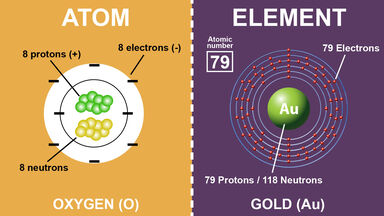 diagram difference between an atom and element
Advertisement

What Is an Atom?

This is why you can’t begin to understand the difference between atoms and elements without first understanding what an atom is and what it’s made of. Simply put, atoms are the building blocks of elements. They are some of the smallest bits of what you would call ordinary matter.

Structure of an Atom

Like everything else, atoms have a few different things floating around inside of them. These subatomic particles include:

What Is an Element?

With atoms out of the way, it’s time to look at elements. If you’ve ever seen a Periodic Table of Elements, then you probably have some idea of what elements are. But to break it down into a simple definition, elements are all the different types of atoms we know exist on Earth. They are arranged by their atomic number on the Periodic Table of Elements.

For example, gold is an element. If you were to hold a chunk of pure gold in your hand, you would be holding an element. Other elements include:

What makes something an element is the fact that all the atoms have the same number of protons in the nucleus. While you can find them all on the periodic table, let’s look at the common elements’ mercury and copper.

What Is the Difference Between an Element and a Molecule?

With atoms and elements all cleared up, it’s important to understand the difference between a molecule and an element. Because like all things in the world, elements and molecules are both made of atoms. You know elements are all the different types of atoms on the periodic table. Molecules are what you get when those atoms are combined. Unlike elements, molecules can be made from the same or different elements. The key to a molecule is that two or more atoms are bonded together.

For example, water is a molecule made of hydrogen and oxygen. It’s actually made of two hydrogen atoms and one oxygen atom. You can also have molecules of a single atom bonded together like two oxygen atoms. This makes up the oxygen humans breathe.

Difference Between Atoms and Elements

It can be easy to see why elements and atoms get confused because elements are atoms. They are just a group of all the same kind of atoms. All the known elements on Earth can be found in the periodic table of elements.

Science is fun right? Keep the chemistry fun going by exploring the difference between atoms and molecules. You can also have more chemistry fun by reading up on molecules and compounds.