Difference Between Data and Information Explained 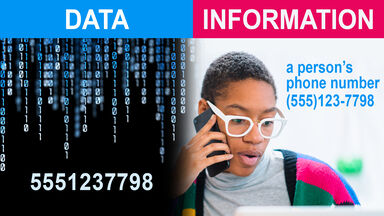 difference between data and information
Advertisement

The term data is simply defined as “facts and figures”. Each piece of data is a little fact that doesn’t mean much on its own. The word data can be used for a singular fact or a collection of facts. It comes from the Latin word datum, meaning “something given”.

The word datum is still the technically correct singular form of data but is rarely used in common language.

Information is defined simply as “news or knowledge received or given”. It is what results when you have processed, interpreted, and organized facts. The word comes from the Latin word īnfōrmātiō, meaning “formation or conception.”

Main Differences Between Data and Information

The terms data and information can mean different things in different contexts, but the main differences between them are:

Data vs. Information in Computers

In the world of computers, data is the input, or what you tell the computer to do or save. Information is the output, or how the computer interprets your data and shows you the requested action or directive.

Data vs. Information in Statistics

In the world of statistics, data is still defined as raw information, but the term statistics is often used in place of information. The statistics interpret and summarize the data.

Data vs. Information in Business and Healthcare

In the world of business, data are often raw numbers and information is a collection of individual data points that you use to understand what you’ve measured.

Seeing examples of data and information side-by-side in a chart can help you better understand the differences between the two terms.

What Do You Know?

Data typically comes before information, but it’s hard to say which is more useful. For example, if the information was processed or organized in a biased manner or incorrectly, it’s not useful, but the data still is. Continue exploring data and information by learning the differences between a hypothesis and a prediction or a hypothesis and a theory. Then, explore the differences between being objective vs. subjective.