What's the Difference Between Ethics, Morals and Values?

Have you ever deemed someone’s behavior to be unethical? Have you ever questioned their moral code or the values upon which they base their decisions? When our minds wander to these places, the terms ethics, morals and values tend to feel very similar, but they are not quite the same. Keep reading for explanations and values, ethics and morals examples to learn how they are different. 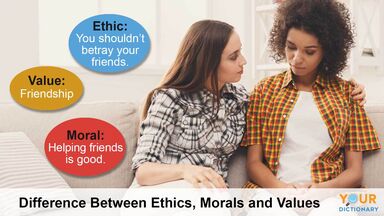 Values are the foundation of an individual person’s ability to judge between right and wrong. Values include a deep-rooted system of beliefs that guide a person’s decisions. They form a personal, individual foundation that influences a particular person’s behavior.

There are examples of values everywhere in your daily life. For example, if your value system is founded upon honesty, you would probably choose to study for a difficult test rather than cheating for a passing grade. However, if you value achievement and success over honesty, you may decide to cheat on the exam instead. This relates to which value is “worth more” to the individual.

Other examples of values include:

These values form our personality types. They also help us make decisions that affect the course of our lives. When these values are shared by others in our community, they are known as morals.

Morals, also known as moral values, are the system of beliefs that emerge out of core values. Morals are specific and context-driven rules that govern a person’s desire to be good. They can be shared by a larger population, but a person's moral code may differ from others' depending on their personal values.

We make moral decisions based on personal values all the time. An example of a moral in the example above is determined by a person's value of honesty: cheating is bad. Someone who values success more than honesty may behave by another moral: cheating is fine.

Additional examples of morals include:

Moral dilemmas occur when morals conflict with each other. For example, what if a daughter couldn’t afford the life-saving medicine her dying mother needed, but she had access to the medicine storeroom?

Ethics and morals are very similar. In fact, many ethicists consider the terms to be interchangeable. However, there are slight differences in how they affect our lives.

While morals are concerned with individuals feeling "good" or "bad," ethics determine what behaviors are "right" or "wrong." Ethics dictate what practical behaviors are allowed, while morals reflect our intentions. Consider morals as the rulebook and ethics as the motivator that leads to proper or improper action.

You're most likely to see a code of ethics in the business or legal fields. These areas are much more black and white than personal values or morals since they set rules for employees and citizens in a society. For example:

Ethics are basically an institution's attempt to regulate behavior with rules based on a shared moral code. Violating ethics has the same consequence as breaking a rule, while violating one's morals results in personal guilt and shame instead of a societal consequence. Ethical dilemmas occur when an institutional set of ethics conflicts with one's personal moral code.

Sound moral judgment is rooted in strong values and acted upon by our ethics. It seems like the three are the same, but they’re different enough to warrant a closer study. Whether you're acting on your personal values, following your moral code or obeying ethical rules, it's important to know what to do next. For more examples of morals in our lives, check out these examples of morals in society and literature.