Difference Between Homozygous and Heterozygous Traits

Why do siblings look different even when they have the same parents? The difference lies in their genes – and specifically, whether they have homozygous or heterozygous traits. Keep reading to learn what the difference between these traits are, and what exactly they can determine. 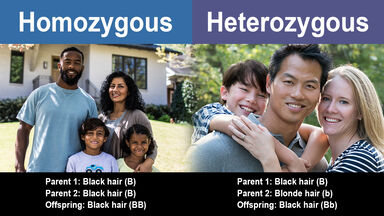 difference between homozygous and heterozygous
Advertisement

The difference between these traits is:

Whether a trait is homozygous or heterozygous determines how the offspring exhibits that trait. If both parents have a trait, their offspring is more likely to have it as well. However, only a look at the individual’s DNA can determine their likelihood of exhibiting a particular trait.

Homozygous means “same genes received during the zygote period of development.” An individual with homozygous traits received one copy of each allele from each parent. These alleles can either be dominant or recessive.

You may see homozygous traits in the following situations:

Genetics get a bit more complicated when it comes to heterozygous, or “different genetic” traits. Offspring who receive a dominant allele from one parent and a recessive allele from the other parent will exhibit heterozygous traits. That’s why siblings with the same parents sometimes look very different from each other: they received different combinations of genes.

Here are some examples of how offspring can exhibit heterozygous traits:

As you can see, heterozygous traits allow for greater genetic variation. They can also protect offspring from gene mutation and possibly harmful genetic disorders. The alleles that offspring receives from its parents can determine what happens to its genetic line for generations to come.

DNA Is the Key to Life

Life seems so random and unpredictable sometimes. However, understanding the study of genetics helps us understand more about how life works. To learn more about the details of genotypes and genetic traits, read an article that details the occurrence of codominance in genetics. Then, explore some examples of inherited traits.