Difference Between Metaphors and Similes for Kids 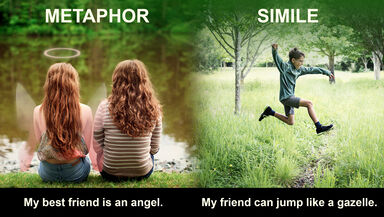 Writing is hard. You might even call it a battlefield. Especially when two different types of literary devices are going head-to-head in a writing battle. While it would be fun to watch metaphor and simile duke it out in the literary arena, it’s not going to happen.

Instead, you can get a clear idea of what a metaphor and a simile are. Since a simile is a type of metaphor, it’s best to start by defining a metaphor.

Metaphors make a direct comparison between two things that seem like they’re not alike. And, yes, there is a reason seem is bold. Why? Because when you think about it, the two things do have something in common.

Still a bit confused? Explore a few more metaphor examples along with what they have in common.

Metaphor was easy right? Well, since a simile is a type of metaphor, understanding what it is will be a snap.

You might have guessed by now that a simile also makes a comparison between two things. However, unlike a metaphor, which says something is something else, a simile uses the word as or like to make the comparison.

Similes are a bit easier to understand because you don’t have to guess what they have in common. You instantly know that their friend and a mouse are both quiet. Just to make sure you completely understand, dive into a few other simile examples.

Easy peasy right? Understanding the difference between a metaphor and a simile isn’t so hard once you look at a few examples. It’s as easy as pie.

Since you know the difference between metaphor and simile, let’s check out when you should use each.

When to Use a Metaphor and a Simile

When it comes to whether you should use a metaphor vs. simile, you want to think about whether your reader will understand what you are saying. For example, if you say, "My room is garbage." It might not make sense to readers because the fact both garbage and your room smells isn’t clear. In this instance, you might say, “My room is smelly like garbage.” That makes it clear to the reader both your room and garbage smell.

It’s also important to vary your similes and metaphors. Using both in your story about your sister can make it more interesting. For example:

Most of the time, whether you use a metaphor or simile is totally up to you.

Adding Flavor to Your Writing

Metaphors and similes are vivid like a picture. They make your writing come to life and add variety to your wording. Since metaphor and simile were a piece of cake, jump into idioms for kids. Or, you could just call it a day!