Difference Between Parameters & Statistics in Studies

When interpreting data reported in a study, it’s important to know the difference between parameters and statistics. Both provide numerical summaries of information but differ in terms of whether the results represent an entire population or a sample of the population. 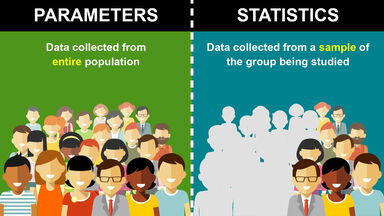 difference between parameters and statistics
Advertisement

The key difference between parameters and statistics is whether data were gathered from an entire group or from a sample of the larger group.

When the results of a study are calculated using data collected from all cases within a specific population, the numerical calculations are parameters. A few examples include:

When the results of a study are based on a sample, the numerical calculations are statistics. A few examples include the following:

It’s important to avoid assuming that data gathered from a sample is truly representative of the overall population. For example, the fact that a certain political candidate is leading by a set number of points in a poll doesn’t mean that the candidate will actually win the election. Not everyone has a chance to answer every poll, and some people choose not to answer polls even when asked.

When reviewing the results of a study, you can be sure that parameters reflect factors relevant to every person or thing within the particular population being investigated. With statistics, though, it’s important to consider how the sample was taken. If the sample isn’t representative of the overall population, then the results shouldn’t be generalized to the larger population. A random sample is most likely to be representative of the population.

Now that you know the difference between parameters and statistics, you’ll be better equipped to accurately interpret the results presented in research studies. While the data provided in the form of numerical calculations is important, it’s just as important to make sure you understand what they represent. Apply your critical thinking skills any time you read the results of a study. If the data are parameters, you can be sure that they are descriptive of the specific population, as defined in the study. If the data provided are statistics, look closely at how the sample was selected when interpreting the results.