Different Types of Drama in Literature

When you hear the word drama, you probably think of your favorite dramatic television show or movie. But literary drama has less to do with a serious storyline and more to do with stage performances. Keep reading to learn more about the different types of drama in literature, and what they look like on the stage. 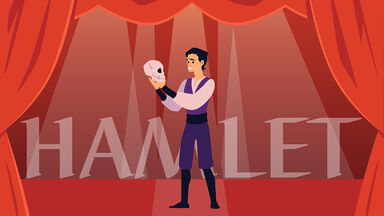 Comedies are usually humorous plays. But being funny isn’t the only way to define a comedy! The elements of a comedy include:

One of the most famous examples of a comedy is William Shakespeare’s Much Ado About Nothing. Beatrice and Benedick transition from foes to lovers with clever banter and more than a few silly misunderstandings. And, like all proper Shakespearean comedies, it ends with a wedding!

A farce is a type of broad comedy. It depends less on a narrative storyline and more on physical humor, sight gags, silly jokes. Here are the parts of a farcical comedy:

For a film reference, think of anything by Monty Python or National Lampoon. On the stage, the absurd humor in Samuel Beckett’s Waiting for Godot (pictured above) is a farcical commentary on life, religion, and human relationships.

Operas are dramas in which the characters sing each line rather than speaking. The entire production is set to a musical score. You can tell you’re watching an opera if it includes these attributes:

One of the most famous operas of all time is Giacomo Puccini’s La Boheme. It tells the tragic story of Rodolfo, Mimi, and the world of French Bohemia. Set to one of opera’s most memorable scores, the story reveals itself over the course of a year.

When you hear drama, you probably think of melodrama. Melodramas tell a serious story in serious ways. Not sure if a drama is a melodrama? Check if it includes the following:

Consider Henrik Ibsen’s A Doll’s House when referring to a melodrama. Nora’s over-the-top reactions place the play right into the definition of melodrama. The ending is a mix of both happiness and hope for Nora, and sadness and despair for Torvald.

It’s tempting to put opera and musical drama into the same category. However, their production proves that there are significant differences between the two. But how can you tell a musical drama apart from an opera? Use this checklist:

Many musicals, such as Les Miserables or Phantom of the Opera, (pictured above) are adapted from longer literary works. Both of these musical dramas express their themes directly through song and progress the plot with musical numbers. They simplify their source material by putting the most important characters and story elements on the stage.

Just from the word tragedy, you can assume that the ending will be sad. But there is more to a tragedy than a play with no happy ending. You can tell if a play is a tragedy if it includes:

Shakespeare has any number of tragedies to choose from. But few can rival Othello for its cruel villain, its hero’s tragic downfall, and its desperately sad ending. Othello loses everything he has ever loved or wanted because he can’t trust that he deserves the life he has.

When you combine the elements of a comedy and a tragedy, you get a tragicomedy! Tragicomedies are more complex than a drama with a few jokes, or a comedy with a serious scene. Some ways to tell if you’re watching a tragicomedy are if it has:

Classic dramas mainly dealt in clear-cut comedy, tragedy, or melodramatic styles. But many modern dramas are considered complex enough to be tragicomedies. Tennessee Williams’ A Streetcar Named Desire has enough elements of a comedy to keep it out of the tragedy genre – but no one can claim than Blanche DuBois is anything but a tragically flawed character. It is the quintessential modern tragicomedy.

The word drama means “action” in Greek. Greek drama began with the work of Aristotle’s Poetics (335 B.C.), which is the oldest recorded work of dramatic theory. The tradition continued throughout Greek culture, marked by the famous laughing/crying masks of drama (Thalia, Muse of comedy, and Melpomene, Muse of tragedy).

The Roman Empire adapted drama into their literary tradition, where it spread into Europe and became known as theater in France and England. The Elizabethan era in particular was a flourishing time for European theater, which set the stage (so to speak) for theater around the world.

When you read a play or see performances on stage, you’re seeing a dramatization of the human condition. Being human involves laughter, tears, music, and tragedy – and no one knew that more than the Bard himself. For more resources on drama, check out a complete list of the plays by William Shakespeare.