Different Types of Government Around the World 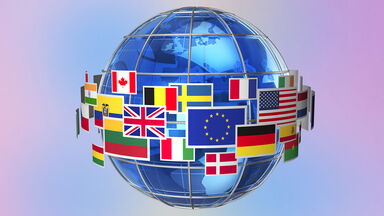 Globe with Flags Types of Government Around the World
Advertisement

While there are numerous political philosophies and systems, there are five specific types of government that are most common around the world. Most forms of government are some variation of one of the following.

The United States is often cited as an example of representative democracy, or a democratic republic. More specifically, the U. S. is a federal republic with a democratic government and a capitalistic economy. There are several other examples and types of democracy in the world, including, but certainly not limited to:

Monarchy is not as common as democracy now, but it was historically one of the most common forms of government. In a monarchy, one family rules, and their title is passed down through the generations. However, much like a democracy, who is in charge isn’t totally cut and dried. In an absolute monarchy, the king or ruler is in control of all the government. The more common constitutional monarchy has a royal family, but they serve mostly as ceremonial figures. Examples of monarchies that exist today include:

Similar to a monarchy, an oligarchy places power with a few people or families, typically a country’s wealthy elite. Unlike aristocracy, oligarchy is not necessarily dependent on noble birth, but on wealth or those who are deemed most “capable” of ruling. The term is derived from the Greek words for "few" (óligon) and "rule" (arkho).

When you think of a totalitarian government, it takes absolute power to the extreme. These leaders control not only the government but also the personal lives of their people. Citizens have no say in government, and the totalitarian regime is 100% in charge. This type of government is forceful and extreme and can come in the form of fascism, socialism or communism.

Types of Government Found Around the World & in History

Anarchy isn’t a type of government; it’s actually the absence of one. In an anarchist society, a central governing body doesn’t exist. Many times, anarchy will take center stage when a government collapses. There are currently no true anarchist countries. The closest example in recent history was Somalia, which had no government from 1991 to 2006, but today it is a federal parliamentary republic. While anarchy has not been implemented on a large scale in the modern world, there are communities such as Freetown Christiania in Copenhagen, Denmark, which is one of the few anarchist communities that is still functioning.

In an aristocracy, the wealthy or noble hold the power. These privileged few leaders make up the ruling class or elite. Historically, Ancient Greece had an aristocratic government. A modern example is the royal family in the U.K., which has an aristocracy known as the peerage as well as a monarchy.

Typically, a dictatorship goes hand-in-hand with an authoritarian and totalitarian government. In this government form, a dictator rules. They typically assert their authority using military power, which is called a military dictatorship. There have been many dictatorships throughout history. Famous examples include Joseph Stalin’s rule of the Soviet Union, Saddam Hussein’s rule of Iraq and North Korea.

Federalism is all about dividing power. Not only does the government have central power, but local states or regions also have their own specific powers. For example, in the U.S. the federal government is the central power, but the individual states all have their own regional and state governing laws. This means state laws might be different in California than they are in Tennessee.

Many times, you see “Republic of” this or that country. When something is a true republic as in republicanism, it means the citizens have the power. They have the voting power and the power to make changes in their government. Now, republicanism can get quite confusing because it typically goes hand-in-hand with federalism and theocracy. Some countries have a parliamentary system and thus a parliamentary republic and countries with presidents are presidential republics. Germany is a notable example of a republic, as it is specifically a federal, democratic, constitutional republic. Some examples of republics include Austria, Chile, the Czech Republic, Israel, Mexico, the Philippines, Uganda, and more.

Types of governments are about who rules. In a theocracy, the ruler is God or a deity. The creation of laws comes from religious texts, scriptures and spiritual leaders. A theocracy also mixes with other types of governments. For example, Iran is an Islamic democracy, and the Vatican government is dictated by the Christian religion and pope.

Economy determines government type, too. See it in action by looking at capitalism, socialism and communism.

While capitalism is actually a type of economy, many times, it works to drive a government and political power. In capitalism, the government doesn’t run the economy; instead, private-ownership corporations and businesses do. While the U.S. is a mixed economy, many would consider it capitalistic. Other examples include Switzerland and Hong Kong.

China is probably one of the most famous historical examples of a communist government. Communism is a theory created by Karl Marx where everything is publicly owned rather than privately like in capitalism. It’s an attempt to create a classless society, but it typically happens through a violent revolution. Beyond China, communist examples include the Soviet Union, Vietnam and Laos.

Socialism and communism both come from the philosophies of Karl Marx for a utopian, classless society. However, while communism uses violence to achieve its aims, socialism places emphasis on making small changes through reforms and laws. Socialist government examples found around the world include Algeria, Cuba, the Scandinavian countries, Tanzania and Venezuela.