A double entendre is a phrase or figure of speech that could have two meanings or that could be understood in two different ways. One of these meanings is often humorous, bawdy or even risqué. Keep reading for several double entendre examples from literature, movies and everyday conversation. 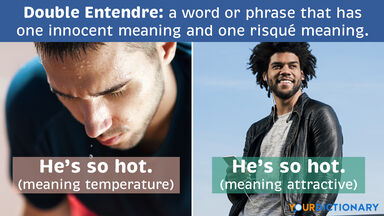 Because double entendres are words or phrases that can be interpreted in two ways, they aren't always sexual in nature, and sometimes they are not even intentional. Some examples of accidental double entendres as newspaper headlines include:

You may notice that some of these double entendres rely on puns or other types of wordplay. They make sense in both interpretations, but the second meaning is a little sillier.

Double entendres, when used intentionally, can be entertaining because they get a laugh both from people in the know and from people who do not get the second (or sexual) meaning. For example:

Movie and television producers often use double entendres to both entertain kids (who do not get the second, sexual or tawdry reference) and parents (who do get the second reference). It's an effective way to increase their viewing audience.

Wordplay Can Add Depth to Writing

Double entendres appear to be innocuous, but a closer look may reveal a bawdy meaning behind the words. They're just one way to use wordplay to establish a silly or risqué tone in your writing. For more examples of wordplay and double meanings, check out examples of paraprosdokians that will tickle your funny bone.