Dramatic irony is a drama technique in which the audience knows something that the character doesn't. Because of this understanding, the words and actions of the characters take on a different meaning. This can create intense suspense or humor, depending on the writer's intention. Take a look at these examples of dramatic irony in plays, films and everyday life. 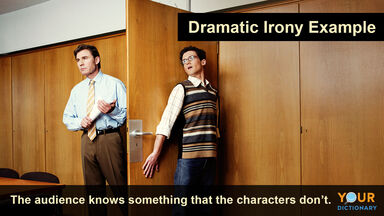 Dramatic irony is one of the most effective types of irony because it makes the audience feel helpless to change the outcome. There are many examples of dramatic irony in literature, movies, television and fairy tales. Some examples include:

Alfred Hitchcock was well-known for suspense in his films and was referred to as the "Master of Suspense." He was fond of surprises for his characters and meant to shock the audience. Hitchcock said the following in regards to dramatic irony:

"The audience is longing to warn the characters on the screen: 'You shouldn't be talking about such trivial matters. There's a bomb beneath you and it's about to explode!'"

The following are some examples of Hitchcock's use of dramatic irony:

Intentional Use of Dramatic Irony

Dramatic irony exists when the audience knows information that the main characters do not. The writer uses this technique intentionally to keep the audience engrossed and engaged while watching what is on the screen or stage. Learn how writers use situational irony in the opposite way — to surprise the audience. You can also check out these literary and everyday examples of verbal irony.