The word dysphemism isn't one you're likely to hear used in everyday conversation. It's an unusual term, but it actually describes a common linguistic occurrence. Any time you hear a person using derogatory terminology to substitute for a word or phrase that isn't inherently negative or ugly, that is an example of dysphemism. 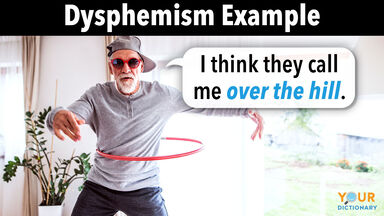 dysphemism example over the hill
Advertisement

Dysphemism is simply the substitution of a negative, insulting, derogatory term for something that is neutral in meaning. Dysphemism can take several forms from negative slang or insulting phrases to snide expressions or curse words.

Dysphemisms are often confused with euphemisms, but these two terms describe different figures of speech. They are similar in that both dysphemisms and euphemisms provide readers with an indirect way to describe something rather than using literal terminology. That's where their similarity ends.

Dysphemism Examples for Death and Dying

While euphemisms for death or dying may include softer terminology like "passed away" or departed, dysphemisms paint a much more stark, harsh picture. They're more negative than simply saying that someone passed away or is no longer with you, which would be examples of euphemisms.

Dysphemisms for a Lack of Intelligence

It's very common for people to use dysphemisms to express their beliefs that someone isn't particularly intelligent.

Dysphemisms for Smart or Studious Individuals

Not only will people use nasty names or sayings for people they perceive as not smart enough, but they'll also use such derogatory language for those they see as being too smart or too studious.

People often use dysphemisms as put-downs for those they see as being different from themselves or from the norm.

Have you ever heard anyone refer to certain occupations with derogatory terminology? Then you've definitely been exposed to dysphemisms.

Dysphemisms for Behavior or Actions

It's not unusual for people to use derogatory terms to describe or explain certain actions or behaviors. They often do so to convey sarcasm or because they think it's funny.

Dysphemisms for Places and Items

It's also common for people to use dysphemisms as derogatory descriptions of places, items or other nouns.

Dysphemisms often find their way into politics. They are sometimes used as political jargon to describe politicians or to negatively brand certain policies or political views.

Examples of Dysphemism in Sentences

To get a sense of how these figures of speech sneak into everyday language, review some examples of dysphemisms in sentences.

Dysphemisms provide a creative way to convey meaning when your intent is to disparage, belittle or insult a person. These terms are informal expressions used as put-downs in the English language. If you're looking for other informal terms that aren't inherently negative, consider opting for slang or jargon. Start by reviewing some modern American slang words for ideas of things to say. For a historical perspective, explore slang words from the past and today. From there, consider enhancing your casual vocabulary with some English colloquialisms.