When you apply to graduate school, you may be asked to write a statement of purpose. It informs a reader why you want to attend a graduate program using specific examples from your life experience. Keep reading for statement of purpose sample essays, as well as tips and guidelines for writing your own statement. 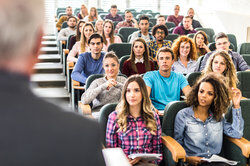 Your statement of purpose should reflect your personality and your professional goals. It is different than a personal statement, which describes you as a person and is typically used in college entrance applications. However, there are standard ways to format your statement for any graduate program. There are also key concepts to focus on as you structure the writing itself.

Graduate admissions offices have hundreds of applications to read through. Your statement of purpose should stand out from the stack, but still use standard formatting. This includes:

When in doubt, following MLA guidelines is a good idea. Your ideas and writing should get a reader’s attention, not your paper’s unconventional format.

Entering graduate school is a step toward your future career. Writing a statement of purpose is an opportunity to explore why you want to join that career. Statements of purpose should focus on the following:

Your graduate program may be more specific in their prompt. Be sure to include any details noted in your application while addressing the above elements of a personal statement.

Graduate programs want to admit students who are passionate about their fields of study and who have relevant experience. A successful admission process will result in a diverse cohort with different backgrounds, skills, and interests. Therefore, your statement of purpose should include why you are both unique and exactly who the program should admit.

Applying to graduate programs in humanities provides both the opportunity and the challenge to showcase one’s writing skills. Here is a statement of purpose sample for a master’s degree.

My first film starred my little brother, our neighbor from down the street, and our old dog, Acorn. I’d written the screenplay when I was supposed to be listening to my fourth-grade teacher talk about long division. In the film, an evil math monster (played by Acorn) came to Earth and forced the Earthlings to give him all the remainders from every equation. So, in a way, I guess I learned something from fourth grade, after all.

I spent the next fourteen years trying to delve into conventional dramas and comedies, but the lure of science fiction was irresistible. Not long after my brother quit my acting company, I joined drama in middle school and the AV club in high school, where my love of filmmaking really came to life. When I got to UNLV to major in Film Studies, I was already looking at everything through a camera lens, much to the annoyance of my fellow students (and my math professors).

Film is the way I see the world. Movies like Close Encounters of the Third Kind and Alien demonstrated that human nature consistently survives even the most unworldly experiences. My personal favorite science fiction film, Plan 9 From Outer Space, taught me how Ed Wood’s pure zest for zany stories transcends conventional standards of filmmaking. It’s that passion that has brought me from the fourth-grade alien enthusiast to an application for USC Film School.

Attending USC would be more than a dream for me. Its commitment to writer-directors connects with my tendency to write screenplays with the shot list in mind, or to direct shorts while tweaking the script on the side. I especially appreciate the recent emphasis on genre writing, since genre is merely a vehicle to tell a quality story. The special effects department at USC is a modern innovation of talent and creativity.

What I hope to achieve at USC is filmmaking experience, yes, but also the camaraderie of my fellow writers and directors. There’s nothing like listening to the film greats of our generation extol their own writing or directing advice. I value the bonding experience a director has with a cast during a shoot, whether it’s a 40-day blockbuster or a one-afternoon short (both of which I have experienced). More than the golden Oscar statue, I long to hold a finished can of my own film. The chance to apply USC’s high expectations to my own brand of storytelling would be the opportunity of a lifetime. I can meet the high expectations of USC if given the opportunity.

My brother, who was never much of an actor anyway, doesn’t star in my movies. Acorn has long since gone to the doggie beyond. But what remains unchanged since those backyard movies is my singular passion for telling stories of love, loyalty, and survival by any means necessary – even (and especially) with aliens. Thank you for your consideration.

Note that the speaker emphasizes their love for an element of filmmaking, but leaves the path open for the graduate program to influence them. The conclusion brings the opening full circle, ensuring that the reader makes an association with the candidate.

It may seem like graduate programs in science or technical fields would value writing skills less than in the humanities. However, a strong statement of purpose may set you apart from other applicants who specialize in technical skills. Check out this statement of purpose example for medical school admission.

When your brother has cerebral palsy, you find yourself asking “why?” a lot. Why does he have it? Why is it harder for him to walk than it is for me? Why do people stare at him when he’s a perfectly typical kid?

All these “whys” in my childhood sent my 10-year-old self into medical journals, encyclopedias, Google searches, and interrogations with my pediatrician. Only when I was in high school did I learn that “why” was the wrong question. Learning why something happens is only part of solving a problem. To solve the rest, you need a “what” and a “how.” What can I do to make my brother’s life easier? What can the doctors do to make him feel more successful in his daily life? And how can I contribute to the medical field to ensure that fewer children feel different from their peers?

Learning more about medicine only inspires me to dig even deeper. My pre-med research at Michigan State stoked my curiosity further, tantalizing me with possibilities and hypotheses and questions, always more questions. The interconnectedness of the vascular system is like a maze where I never meet a dead end. Spending time in maternity wards, interning with SLPs in elderly care facilities, and tutoring children on the autism spectrum connects my fascination with medicine to the real-world people who don’t need a textbook to define what they are feeling.

I always knew that Johns Hopkins School of Medicine set the standard for medical research and patient care, but after learning more about its Biomedical Engineering program, it became my mission to earn a place in its admissions. After touring the campus and the school’s state-of-the-art facilities, I felt like I was home. It seemed that the “why” in my life really began to matter again, as no scientific study can exist without that innate curiosity. I admire Johns Hopkins’ standard of excellence and the luminary careers of its alumni, particularly Dr. Edwin Gruber – who has become a personal hero of mine. His belief in the role of medical research for genetic conditions has influenced every moment of my study.

My brother is my favorite person in the world, and I wouldn’t change one thing about him. But if there were a way to make his day brighter and his life easier, I’d spend my entire career learning how – which is what I hope to do at Johns Hopkins. It would be my honor to walk the halls of lifesavers who have come before me, and to one day call myself a member of the school’s prestigious alumni.

This statement of purpose does not focus on the candidate’s grades or medical qualifications, all of which can be found later in an application packet. Instead, the reader learns more about the applicant, their inspiration and drive for attending medical school, and their connection to the program itself.

Tips for Writing a Statement of Purpose

When you are ready to write your own statement of purpose, keep these key pointers in mind:

The most important thing to remember in a statement of purpose is to be authentic. You should really care about getting admitted to a graduate program. If you’re not excited about the next step in your education, the admissions office won’t be excited about you, either.

Once you’ve finished writing a statement of purpose, you can look over more articles on college writing. A guide to writing a personal statement is a good resource for your library. And don’t forget these helpful tips on writing college essays!