It's not uncommon for someone who hears a word said out loud to confuse it with another word that sounds similar (or even identical) when spoken. When this happens, the result is what linguists would call an eggcorn. Someone hearing the word "acorn" for the first time could actually think the speaker is saying "eggcorn," so this term that has no other meaning has come to be used to describe this phenomenon. 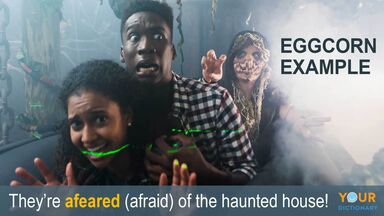 While eggcorns are an error, they're not nonsensical and they don't change a speaker's meaning. Sometimes the way a person mishears or misinterprets a word causes them to use a different word, or approximation of a word, that is so close to the correct term that what they're saying actually makes sense (or scents, as the case may be with an eggcorn). It would be wrong to write "scents" if you mean "sense," but in spoken communication, the term would be understood correctly in context.

Many examples of eggcorns are used in everyday language.

Some eggcorns are just one word, as illustrated by the bold terms below.

There are many examples of two-word eggcorns.

Some eggcorns are longer phrases. The examples below have three or more words.

Eggcorn vs. Mondegreen: How Do They Differ?

People sometimes confuse eggcorn and mondegreen, but these two types of linguistic errors are not exactly the same thing. While both involve mishearing or misinterpreting language, mondegreen refers to mishearing words or phrases, though mondegreen refers only to wording in song lyrics or poetry. Unlike with eggcorn, mondegreen changes the meaning.

Eggcorns and mondegreens aren't the only kinds of language errors that are interesting and more than a bit entertaining to learn about. To learn more about common linguistic mistakes, review some examples of malapropisms. From there, spend some time exploring examples of spoonerisms. You'll be on your way to expanding your English language skills while getting a good example of word usage errors to avoid.