You've probably heard of a eulogy. However, did you know there was a whole section of poetry dedicated to lamenting the dead? This is called an elegy. Learn more about what an elegy is and how it's been used to create beautifully crafted elegy poem examples. 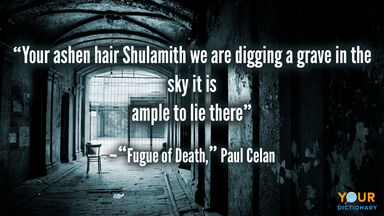 Generally, elegies serve to mourn the loss of a loved one. But, they can sometimes be about different types of feelings of sadness, a general sense of loss, or even praise or celebration of life, as opposed to solely focusing on death. While elegy poems are not the most joyful type of literature, they are certainly worth knowing about since they provide details to the reader about someone else's life. Studying, deciphering and analyzing the text of elegy poems is the most effective way to understand the form and the emotional effect of such literature. See a few perfect elegy poem examples to analyze.

View a selection from Walt Whitman's poem entitled, "O Captain! My Captain!" which was written in memory of Abraham Lincoln. Whitman described his emotions when Lincoln was murdered, and he paints an emotionally evoking picture of the dead Captain lying still.

"O Captain! my Captain! our fearful trip is done,
The ship has weather’d every rack, the prize we sought is won,
The port is near, the bells I hear, the people all exulting,
While follow eyes the steady keel, the vessel grim and daring;
But O heart! heart! heart!
O the bleeding drops of red,
Where on the deck my Captain lies,
Fallen cold and dead."

Fugue of Death by Paul Celan

Explore this more modern extract, which is from Paul Celan's "Fugue of Death." Once again, the reader sees the emotions of a person stricken by a deep, biting loss. It is not for one person but for all the people lost in the Holocaust.

Elegy Written in a Country Churchyard by Thomas Gray

One well-known example of an elegy is Thomas Gray's "Elegy Written in a Country Churchyard." See an excerpt of this elegy poem.

"The curfew tolls the knell of parting day,
The lowing herd wind slowly o'er the lea,
The plowman homeward plods his weary way,
And leaves the world to darkness and to me.

Now fades the glimm'ring landscape on the sight,
And all the air a solemn stillness holds,
Save where the beetle wheels his droning flight,
And drowsy tinklings lull the distant folds;

Save that from yonder ivy-mantled tow'r
The moping owl does to the moon complain
Of such, as wand'ring near her secret bow'r,
Molest her ancient solitary reign."

Not all elegy examples need to be sad. In fact, Jonathan Swift takes a comical approach in his elegy.

"His Grace! impossible! what dead!
Of old age too, and in his bed!
And could that mighty warrior fall?
And so inglorious, after all!
Well, since he’s gone, no matter how,
The last loud trump must wake him now:
And, trust me, as the noise grows stronger,
He’d wish to sleep a little longer.
And could he be indeed so old
As by the newspapers we’re told?"

Poet Ambrose Bierce also creates a parody in "Elegy." This poem was a parody of Thomas Gray's famous elegy.

"The cur foretells the knell of parting day;
The loafing herd winds slowly o'er the lea;
The wise man homewards plods; I only stay
To fiddle-faddle in a minor key."

A Refusal to Mourn the Death, by Fire, of a Child in London by Dylan Thomas

In this elegy, Dylan Thomas proclaims the suffering and death that came from the World War II London fire. While he simply discusses one child in "A Refusal to Mourn the Death, by Fire, of a Child in London," he's commenting on every life lost.

Whether you have read the different types of elegy poems before or not, reviewing them will provide a clearer understanding of what an elegy poem is and how it functions.

Some of these poems are quite famous, while others are not so well known. In any case, reading them will help deepen your appreciation for elegy poems.

From Loss to Comfort

An elegy poem starts off mournfully, but it should then praise the dead and finish with comfort or solace for those left behind. This is the standard format of an elegy poem, though some may differ. To see more examples of classic elegies and understand the difference between an elegy and eulogy, explore an elegy definition and examples. You might also enjoy famous quatrain poem examples.