There are over 118 known elements in the world, and scientists are discovering new elements. Explore element examples to better understand what these tiny substances are. 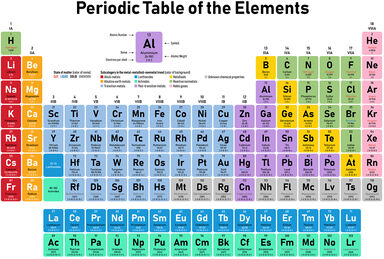 What Is an Element?

An element in science, or specifically chemistry, can be defined as “any substance that cannot be separated into different substances by ordinary chemical methods.” Each element is made of a specific and unique type of atom. Everything in the universe is made of one or more elements.

Each individual element is considered a pure element because it is not mixed with any other elements. Each element is represented by a standard symbol shown here in parentheses.

Some of the most common elements are:

Examples of Elements on the Periodic Table

All the known elements in the world are listed on the Periodic Table of Elements. The elements are grouped by similarities, and each has a standard symbol assigned to it. The three main groups are metals, non-metals, and metalloids, but metals and non-metals are broken down further into smaller groups.

Alkali metals are a group of metals that have only one electron and only occur in nature as compounds.

Alkaline earth metals are a group of metals that all occur in nature and are shiny.

Transition metals are a group of metals “whose atom has a partially filled d subshell, or which can give rise to cations with an incomplete d subshell.”

Nonmetals are usually dull, not malleable, not conductive, and not magnetic. Nonmetals are divided into two categories: reactive nonmetals and noble gases.

The noble gases used to be called inert gases and are part of the nonmetals group. They are all odorless and colorless gases. These four are all naturally occurring noble gases along with helium and neon.

Metalloids have some characteristics of both metals and nonmetals.

A compound is made of two or more elements held together by ionic or covalent bonds. Unlike pure elements, compounds can be broken down.

Anything that’s not found on the Periodic Table is not an element. Examples of non-elements related to science and chemistry are: