Knowing how to use an ellipsis -- a set of dots -- is an important technique in writing. An ellipsis can serve a variety of purposes, from signalling the omission of a word (or phrase) to indicating the passage of time. These ellipsis examples in literature illustrate a number of ways you can use this versatile punctuation device in your own writing. 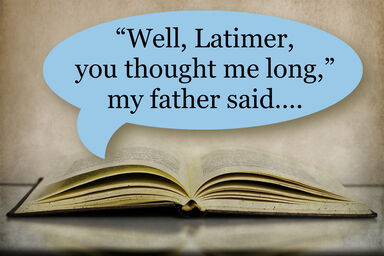 Published in 1811, Jane Austen’s Sense and Sensibility is a very early example of the three-dot ellipsis. According to Ellipsis in English Literature: Signs of Omission, an ellipsis was often represented by a dash in the 1800s. In this scene in Sense and Sensibility, the ellipsis represents a trailing off in speech.

It was several days before Willoughby's name was mentioned before Marianne by any of her family; Sir John and Mrs. Jennings, indeed, were not so nice; their witticisms added pain to many a painful hour;—but one evening, Mrs. Dashwood, accidentally taking up a volume of Shakespeare, exclaimed,

"We have never finished Hamlet, Marianne; our dear Willoughby went away before we could get through it. We will put it by, that when he comes again...But it may be months, perhaps, before THAT happens."

The Great Gatsby by F. Scott Fitzgerald offers a different kind of ellipsis example. Here, the ellipsis represents a time lapse that is open to interpretation. The reader must decide how the two characters came to be in this situation.

... I was standing beside his bed and he was sitting up between the sheets, clad in his underwear, with a great portfolio in his hands.

In the poem “Dream Variations,” Langston Hughes uses ellipses to indicate a dreamy trailing-off, a kind of pause in rhythm that lets the reader take a moment to picture the dream he describes.

In “The Love Song of J. Alfred Prufrock,” T.S. Elliot offers another example of the ellipsis as a pause in the rhythm of a poem. This poem has a stream-of-consciousness style, meant to sound like a series of random wandering thoughts. The ellipsis is a perfect choice here, as the pauses and trailing off of thoughts work well with this style.

“Hope” Is a Thing With Feathers

Emily Dickinson uses a primitive form of the ellipsis in her poem, “‘Hope’ Is a Thing With Feathers.” Here, the trailing off and pausing are represented by dashes, a common feature in Emily Dickinson’s work. However, the dashes serve the purpose of the three-dot ellipsis, according to Ellipsis in English Literature: Signs of Omission.

Some printings of William Shakespeare’s famous tragedy Hamlet feature the use of a three-dot ellipsis, while others use a dash for an ellipsis. Either way, the mark of punctuation represents words unsaid.

To the next abstinence: the next more easy;
For use almost can change the stamp of nature,
And either . . . the devil, or throw him out
With wondrous potency. Once more, good night:
And when you are desirous to be bless'd,
I'll blessing beg of you.

In To the Lighthouse, Virginia Woolf also uses the ellipsis to indicate omission. Here, the words and pictures of a poster are difficult for the characters to make out; the ellipses allow the reader to share the sense of annoyance the characters may feel.

A fellowship, a professorship, he felt capable of anything and saw himself - but what was she looking at? At a man pasting a bill. The vast flapping sheet flattened itself out, and each shove of the brush revealed fresh legs, hoops, horses, glistening reds and blues, beautifully smooth, until half the wall was covered with the advertisement of a circus; a hundred horsemen, twenty performing seals, lions, tigers... Craning forwards, for she was short-sighted, she read it out... "will visit this town," she read.

The Adventure of the Gloria Scott

In “The Adventure of the Gloria Scott,” published as part of The Memoirs of Sherlock Holmes by Sir Arthur Conan Doyle, is another example of the ellipsis being used to indicate omission and disjointed thoughts.

It means nothing to the message, but it might mean a good deal to us if we had no other means of discovering the sender. You see that he has begun by writing “The...game...is,” and so on.

George Eliot also utilizes the ellipsis in the novella, The Lifted Veil. Here, the character of Latimer has the gift of second sight. When he sees into the future, Eliot uses ellipses to mark that he’s using his gift.

"Well, Latimer, you thought me long," my father said….

In Dubliners, James Joyce uses the ellipses in the short story “The Sisters” to give the dialogue a conversational tone that represents the situation at hand. In this story, two women are discussing the death of a priest, but the use of ellipses indicate what is also unsaid because of politeness.

“Oh, quite peacefully, ma’am,” said Eliza. “You couldn’t tell when the breath went out of him. He had a beautiful death, God be praised.”

Tips for Using an Ellipsis

As you can see from these ellipsis examples in literature, the ellipsis is a very powerful device when used properly. Knowing how to use an ellipsis is important. Keep these tips in mind for your own writing:

The basic purpose of an ellipsis is to show something has been omitted or someone is pausing. It’s also a sophisticated way to affect the tone of a story or essay. As you write, think of how your choice of punctuation affects the overall mood in your work. You’ll find an ellipsis is a useful tool to have on hand.