Strike an informal tone in your speech or writing by studying English colloquialism examples. You'll see how these words and phrases add personality and a casual feeling to any kind of communication, as well as how they vary from region to region. Like idioms, these words and colloquial phrases can be difficult for a non-native speaker to understand. 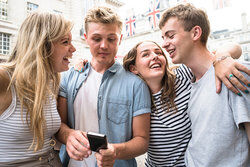 Great Britain has some unique colloquialisms and regional expressions that can lend a region-specific and less formal touch to any piece of writing. These are a few notable ones, including many British slang words:

Americans have a few unique words and phrases of their own, especially when it comes to casual conversation. Add these colloquialisms and American slang expressions to your writing or speech if you want to sound less formal:

Canadians also have expressions that are unique, and there's quite a bit of variation in Canadian slang by region. If you want to sound casual, try these words and phrases:

You'll also find many English colloquialisms in Australia. While some are shared with other English-speaking countries, some are unique to this area:

Colloquialisms are region-specific words and phrases that add color and a casual tone to your writing or speech, but they aren't the only way to accomplish this goal. You can also learn about other similar terms that can make your writing more interesting. Several of these overlap with colloquialisms.

Have the Right Words

Colloquial sentence examples can help you learn the difference between American and British English. Understanding colloquialisms can also give you more tools to choose the right words for any type of writing, from formal papers to casual letters to friends.