Epistrophe is the repetition of one or more words at the end of a phrase, clause, verse, or sentence. This type of rhetorical device is also referred to as "epiphora." 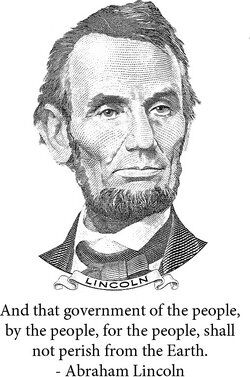 The reverse of an epistrophe is an anaphora, which is the repetition of words at the beginning of a phrase, clause, verse, or sentence.

The moment you see epistrophes in action, you'll recognize them. They can drive a certain point home, whether someone's delivering a speech, relaying prose, or catching your ear with their lyricism.

Let's get right into some epistrophe examples and see if you might develop an affinity for using this rhetorical device in your writing.

Sometimes, there's no better way to stir up the crowd than with a dash of repetition. Check out these epistrophes from famous speeches:

Literature draws some of its dramatic appeal from epistrophes. Poetry, in particular, lends itself well to the rhythmic flow of an epistrophe. Let's take a look at a couple examples:

If you had known the virtue of the ring,

Or half her worthiness that gave the ring,

Or your own honour to contain the ring,

You would not then have parted with the ring.

- The Merchant of Venice, William Shakespeare

The moth and the fish eggs are in their place,

The bright suns I see and the dark suns I cannot see are in their place,

- Song of Myself, Walt Whitman

When I was a child,

I spoke as a child,

I understood as a child,

I thought as a child.

- The Grapes of Wrath, John Steinbeck

- Flood: A Romance of Our Time, Robert Penn Warren

Where affections bear rule, their reason is subdued, honesty is subdued, good will is subdued, and all things else that withstand evil, for ever are subdued.

-The Art of Rhetoric, Thomas Wilson

Just like a catchy speech, lines delivered in some of our favorite movies, TV shows or songs have made a mark due to this repetitious zeal. Here are a few epistrophe examples from popular moments in entertainment:

And close your eyes, child, and listen to what I'll tell you.

Follow in the darkest night the sounds that may impel you.

And the song that I am singing may disturb or serve to quell you.

Cause if you liked it then you should've put a ring on it.

If you liked it then you should've put a ring on it.

Don't be mad once you see that he want it.

If you liked it then you should've put a ring on it.

There's a certain element of lyricism to epistophes. They can catch people's attention in a speech. The audience will know the speaker is trying to drive a very clear point home.

Epistrophes can also flit about poetry, providing an easy rhyme and reason, as in Walt Whitman's Song of Myself. As you continue to dabble in various forms of colorful expression, we hope you'll enjoy these descriptive poem examples and see which literary tool you'd like to use next!