Great stories have exciting twists, relatable characters, vivid descriptions, and lasting effects. But behind your favorite story is a strong structure, made up of the essential elements of storytelling: plot, character, setting, theme, point of view, and tone. With these basic building blocks and some wonderful writing, any story can be the next bestseller. 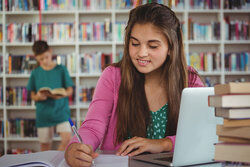 Plot of a Story

Every story needs a beginning, middle, and end. Skillful stories typically have a straightforward plot, and yet also manage to surprise the reader with plot twists that create interest.

Every story varies in its sequence of events and how long the character spends in various steps. That being said, the most successful stories keep the plot moving at a steady pace that leads to a satisfying resolution.

Complex and relatable characters are important to a good story. The writer can create these types of characters by understanding character types and character traits.

Each of the types of characters in a story contributes to the plot, but in very different ways.

Example: In Jane Austen's Pride and Prejudice, Elizabeth Bennet's dialogue and behavior show that she is witty, discerning, and playful. We can then predict how she will react when Mr. Darcy invites her to dance.

Setting of a Story

Where and when a story occurs can affect what characters do, how the plot unfolds, and whether the reader can connect with the author's choices. Consider the two main types of setting when writing or reading a short story.

This type of setting can be the backdrop for almost any story. The time period and physical place don't affect the plot in a major way.

Example: Most fairy tales take place in a distant kingdom during the Renaissance period. However, the themes of these stories do not depend on their backdrop.

An integral setting is a time and/or place that directly affects the plot. Alternatively, the story depends on that setting as an integral element.

Example: The characters in William Golding's Lord of the Flies create a society on a deserted island where their plane has crashed.

The point where the protagonist's and antagonist's interests collide is the conflict. There are many types of conflict found in different stories, but they can be broadly categorized as external conflict and internal conflict.

An external conflict exists between a character and something else (like another character, nature, society, or fate) outside of the character's control. He or she must resolve this conflict during the rising action or climax of the story.

Example: The stepmother in Cinderella sabotages Cinderella's chance to attend the royal ball.

Once you identify a story's plot, setting, characters, and conflict, you can work on finding its theme. The theme is the story's "big idea" or underlying message about life. It can be one word that embodies what a story is trying to say or it can be a longer phrase.

Sometimes you can find clues for a story's theme in its motifs, which are repeated images, sounds, words, feelings, or other story elements.

Example: In F. Scott Fitzgerald's The Great Gatsby, Jay Gatsby watches Daisy's green light on East Egg every night. This foreshadows how much her absence affects his happiness.

The theme of a story is not the same as its subject, which is the actual topic of the story.

Example: The Harry Potter series is about a boy wizard at Hogwarts. However, its themes are friendship, bravery, and good vs. evil.

Even though the main character is the central figure of the story, the point of view (or perspective) of the story may not be theirs. Sometimes, a story uses a narrator to tell the story.

In the first-person point of view, the person telling the story is a character, usually the main character (but not always), and speaks from an "I" perspective.

Example: R.A. Montgomery, Journey Under the Sea from the Choose Your Own Adventure series

"You are a deep-sea explorer searching for the famed lost city of Atlantis. This is your most challenging and dangerous mission."

A third-person narrator tells a story that is happening to other people. A narrator can be omniscient, where they know about all events and characters, or limited, where they follow only one or a few characters.

"Yossarian was moved very deeply by the absolute simplicity of this clause of Catch-22 and let out a respectful whistle."

The final element is the tone of the story. Tone is the general feeling of a story or scene, which the author establishes with vivid word choice. All of the previous elements must be consistent in order to achieve the desired tone.

It's easy to confuse tone and mood, but they are not interchangeable. A story establishes its tone with all of the previous storytelling elements. The mood of the story, on the other hand, reflects the emotion the author wants the reader to feel.

Example: In Emily Bronte's Wuthering Heights, the dark, foreboding setting and tortured character of Heathcliff, paired with themes of loss and forbidden love, establish an eerie tone. This leads to a dreary mood for the reader.

Getting Started With Story Writing

Now that you know about the elements of storytelling, it's time to start writing. Some story starters might give you the inspiration you need, or you can learn more about writing short stories and getting past the first chapter. How will your tale unfold?