Examples of Famous Allegories: 4 Books You Should Read

Art is often a reflection of something else: the world around us, the world that will be or the world as it was in the past. Sometimes art represents all these at once. One way literature, in particular, conveys this to an audience is through allegory. 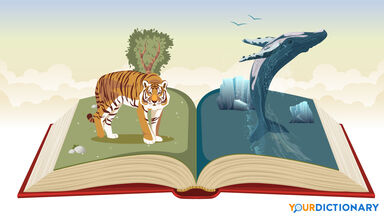 An allegory is a poem, story or image where the characters and events are symbolic and represent a greater meaning or truth, particularly a religious, moral or political idea. The purpose of an allegory is to teach an idea or principle or to explain it. Allegory is derived from the Old French allegorie from the Latin and Greek allegoria, which means "speaking about something else."

Allegorical literature has experienced popularity over many centuries. Some of the most prominent books of allegory include:

Pilgrim's Progress is likely the most famous piece of allegorical English literature. It was written by John Bunyan, a preacher intending to spread the word of Protestant doctrine, particularly the concept of what is necessary in order to achieve salvation. The book contains a myriad of representations.

These are just some of the ways in which this work may be seen as an allegory. Different readers over time have read different meanings into the book, which shows the level of depth that Melville managed to include in his work.

Animal Farm is an allegory example that uses animals on a farm to represent the overthrow of Tsar Nicholas II, the actions of Stalin, and the revolution in Russia before World War II. The struggles of the animals on the farm may be seen as a metaphor for:

Literary critics and historians have linked each of the characters to central players in the Russian revolution and/or the second world war.

In a more general sense, Boxer stands for the working class, while Squealer represents communist propaganda. The doctrine of "animalism" in the book represents real-life communism, allowing Orwell to make clear his position on the political situation in Russia through the use of metaphor and allegory.

Life of Pi by Yann Martel

In Life of Pi, the main character is a child who’s stuck on a boat with a tiger. At first, he doesn’t realize the tiger’s there because it’s under a tarp. As soon as he becomes aware of the tiger, he tries to get away from it. In the end, the two develop a tight bond.

The allegory is woven throughout the novel and it’s meant to mirror a relationship with God. The author, Yann Martel, would argue that we don’t always realize God is present. When we do, we often try to escape Him by living according to our own will. But, in the end, a life lived in union with God is a happier one.