Examples of Levers You Encounter Daily

When you think of a lever, you may think of a piece of construction machinery or laboratory equipment. But like most simple machines, levers are part of your everyday life — and in many ways, they make your everyday life possible! Keep reading for examples of levers that you see every day, including in the house, in the garden and in the sports world. 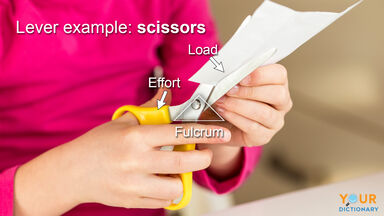 Levers in the first class category are probably what you imagine when you hear the word "lever." Like all simple machines, levers apply force to a load to do work. Levers use a beam balanced on a fulcrum, which changes the direction of the force to act on a load. First class levers have the fulcrum in the middle of the beam, the force on one side, and the load on the other. The effort is equal to the load, meaning that the force you put in (the input) comes out the same on the other side (the output).

Examples of levers in the first class category include:

Second class levers also apply force from one side of a beam to another. However, the fulcrum is on one side of the beam, rather than in the middle. The load is in the middle of a second class lever. The effort is farther away from the load, and the load is greater than the effort — which means that you don't need to work very hard to make these levers perform a task.

Examples of levers in the second class category include:

Levers in the third class category don't look much like levers at all. However, when they are used with your hands, they perform the same work. One hand works as the fulcrum holding the beam in place, and the other applies force to the load. The effort is close to the load, and it must be greater than the load itself. That means you are putting in more work than the lever is performing.

Take a look at these examples of levers in the third class category:

Levers Help Us Do Work

We use simple machines like levers to make all kinds of work easier. Whether you're prying open a door with a crowbar, hitting the winning home run or turning off the light switch in your room, levers help you perform the work needed for physical activity. Learn more about simple machines with these wheel and axle examples used in everyday life. To learn more about physics and energy, check out some everyday examples of different types of energy.