Examples of Mammals From Around the World

What do squirrels, narwhals, cougars, and humans have in common? They’re all mammals, and no matter where you are in the world, they are an important part of their ecosystems. Take a quick trip around the globe to find mammal examples from all over the world. 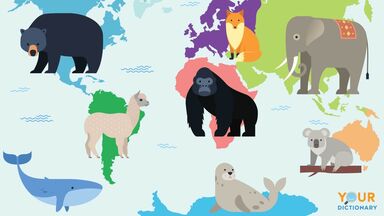 mammals around the world
Advertisement

Many African mammals live in the desert and savanna biomes found on the continent. They fall in different levels of the food chains in their ecosystems and range from predator to prey. You’ll find an amazing variety of animals in nearly every part of Africa.

Examples of mammals in Africa include:

You may think that Antarctica is so cold that no mammal could live there. But you’d be wrong! Mammals like polar bears and walruses live on the other side of the world at the North Pole, but there are many land and sea mammals who call Antarctica home alongside Antarctic penguins.

Asia is an enormous continent filled with a rich variety of wildlife. Mammals that live in Asia range from tiny to enormous, and they are all important members of their own habitats.

Australia is the only continent that’s also an island – and an entire country! There are many mammals native to this island continent, including grassland, desert and coastal mammals.

Examples of Australian mammals are:

Europe has lots of different biomes, including forests and grasslands, where mammals make their homes. They range in size from the tiny dormouse to the European bison. Many of these mammals are unique to Europe, while others have cousins in other parts of the world.

Other mammals in Europe include:

North America has a variety of biomes and a variety of mammals only found there. These unique mammals live in the sky, on the ground and in the oceans surrounding the large continent. Most of these mammals are native to North America, while others came over with European explorers and settlers.

The mountain ranges in South America allow many different types of mammals to thrive. South America also contains the Amazon river and rainforest, which include the largest variety of wildlife on earth. You’ll find freshwater mammals, flying mammals, mountain-dwelling mammals, and many more on one amazing continent.

Examples of mammals from South America are:

Now that you’ve seen examples of mammals from every continent, it may seem like they have very little in common. Some mammals are small and vulnerable, while others are the apex predators of their food chains. But actually, there are some characteristics shared by all mammals, no matter their habitat or ecosystem. You’ll find that even orca whales and fruit bats have a lot in common!