Examples of Ballads in History: From Poetry to Songs

When people hear of ballads, they immediately think of songs like lovestruck melodies from famous performing artists such as The Righteous Brothers, Elvis Presley, Lonestar, Frank Sinatra, and Peter Gabriel. While they are partially correct, ballads can also be narrative pieces written in a poetic form. Explore ballad examples through history by looking at different excerpts. 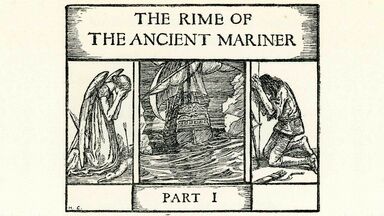 scene from the rime of the ancient mariner
Advertisement

When you think ballad, think story. Ballads are a type of narrative verse, with some consisting of quatrains and others consisting of couplets. Ballads have a few different elements.

They may eventually be set to music, or they remain in their original forms. However, in general, whether a ballad is a song or a story, it tends to have some sort of musical quality to it.

Ballads were a major part of the oral tradition. Therefore, they were not frequently written down. It was not until around the 13th century in Italy and Spain that ballads became an important form of the written literary tradition. Examine an early example of ballad.

This form of poetry tells more of a story than many other poetry types. The ballad is able to complete a more full picture of what is going on. A 13th century example of a ballad is "Ballata 5" by Guido Cavalcanti, which emphasizes the form and voice of the standard ballad of the day.

"That which befalls me in my Lady's presence
Bars explanation intellectual.
I seem to see a lady wonderful
Spring forth between her lips, one whom no sense
Can fully tell the mind of,and one whence
Another, in beauty, springeth marvelous,
From whom a star goes forth and speaketh thus:
'Now my salvation is gone forth from thee.'"

Throughout the 15th century, ballads began to take the form of advice pieces. Their purpose was often to impart wisdom upon the reader. Their influence also spread, and soon writers in England, Spain, France, Italy, and Germany were composing them.

Ballad of the Gibbet by Francois Villon

In the middle of the 15th century, Francois Villon wrote a ballad entitled "Ballad of the Gibbet.” Villon was advising his enemies but also making a narrative statement about the condition of being hunted by another person.

"Brothers and men that shall after us be,
Let not your hearts be hard to us:
For pitying this our misery
Ye shall find God the more piteous."

Ballad of the Cool Fountain by Edwin Honig

Around the same time period, Edwin Honig crafted "Ballad of the Cool Fountain." This piece is proof that the ballad began advancing toward much more narrative forms.

“Fountain, coolest fountain,
Cool fountain of love,
Where all the sweet birds come
For comforting-but one,
A widow turtledove,
Sadly sorrowing,
At once the nightingale,
That wicked bird, came by,
And spoke these honied words:
'My lady, if you will,
I shall be your slave.'"

The Rime of the Ancient Mariner by Samuel Taylor Coleridge

One of the most famous examples of a ballad is Samuel Taylor Coleridge's "The Rime of the Ancient Mariner." He truly sophisticated the form because he combined elements of the earlier ballads with newer methods. While his work is a complete narrative piece, a reader could still take out one section and get a sense of what is going on, much like in a novel. His ballad is also extremely lyrical. If you try singing these words to the tune of the Gilligan's Island theme song, you will see its lyrical quality.

“It is an ancient Mariner,
And he stoppeth one of three.
By thy long grey beard and glittering eye,
Now wherefore stopp'st thou me?
The bridegroom's doors are opened wide,
And I am next of kin;
The guests are met, the feast is set:”

The following ballads are considered ballads in the poetic sense. Much like Coleridge's piece, they could be set to music, but that was not the original intent of their authors. Different examples you can explore include:

Read through some of these ballad poems and you will find the main strand that ties them together: they all tend to tell a certain story. Let’s check out a few in more detail.

Yeats was a poetry master. However, his ballad “The Second Coming” almost makes you want to sing.

“Turning and turning in the widening gyre
The falcon cannot hear the falconer;
Things fall apart; the centre cannot hold;
Mere anarchy is loosed upon the world,
The blood-dimmed tide is loosed, and everywhere
The ceremony of innocence is drowned;
The best lack all conviction, while the worst
Are full of passionate intensity.”

Keats was another poetry wizard that weaved magic with the narrative style and structure of a ballad. He used the ABCB rhyme scheme and four-line stanzas for his famous poem “La Belle Dame Sans Merci.”

“I saw pale kings and princes too,
Pale warriors, death-pale were they all;
They cried—‘La Belle Dame sans Merci
Thee hath in thrall!’

I saw their starved lips in the gloam,
With horrid warning gapèd wide,
And I awoke and found me here,
On the cold hill’s side.”

Poetry great Edgar Allen Poe also dabbled in the waters of the ballad through his narrative, yet depressing poem of his lost love. The regular rhyme scheme, narrative style and vivid imagery make it a perfect ballad example.

“It was many and many a year ago,
In a kingdom by the sea,
That a maiden there lived whom you may know
By the name of Annabel Lee;
And this maiden she lived with no other thought
Than to love and be loved by me.”

The Ballad of Reading Gaol by Oscar Wilde

“He did not wear his scarlet coat,
For blood and wine are red,
And blood and wine were on his hands
When they found him with the dead,
The poor dead woman whom he loved,
And murdered in her bed.”

Of course, ballads are also types of songs, and these particular types of songs tend to be romantic, although they can portray other emotions as well. A few examples include:

Again, listening to or reading the lyrics of these songs will show you the common characteristics of ballads.

Unchained Melody by the Righteous Brothers

A famous example of a ballad song can be found by The Righteous Brothers.

Ballad of the Triangle Fire by Ruth Rubin

"In the heart of New York City, near Washington Square
In nineteen eleven, March winds were cold and bare.
A fire broke out in a building ten stories high,
And a hundred and forty-six young girls in those flames did die."

Ballads are important to look at because they show how the form has developed over time. A ballad is not simply a romantic song, although that definition will still apply in the field of music. Romance can be infused into ballads, especially if they are a narrative tale of love (or hate). However, they are so much more as well. Learn more about how to write a ballad by checking out how to write a ballad poem step by step.