Examples of a Barbiturate: Types, Uses and Side Effects

Barbiturates are drugs that can be used for a wide range of reasons. These drugs are known to depress the central nervous system and are therefore utilized for surgery as well as for sedation or as anticonvulsants. They can be used to treat insomnia, anxiety or seizure activity, for euthanasia purposes or during executions. They also have been used recreationally. 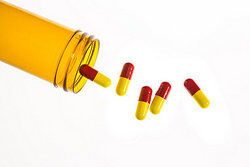 Prescription bottle of pills as examples of barbiturate
Advertisement

Examples of Barbiturates By Time to Act

These take very little time to act and anesthesia is the result within about a minute after administration via an I.V.:

The following are short and intermediate acting and are preferred by those who abuse these drugs:

Long-acting barbiturates that take about an hour to work include:

Barbiturate Uses and Side Effects

Nausea, vomiting, dizziness or shivering can occur after injection.

Typical side effects are drowsiness and dizziness.

Headache and nausea are the most common side effects from this drug.

Amobarbital can cause various side effects including confusion, nervousness, hallucinations, anxiety, depression of the central nervous system and agitation. Its use can also result in hypoventilation, bradycardia, constipation, nausea and vomiting, fever, liver damage and headaches.

Usage of pentobarbital can result in side effects such as hallucinations, insomnia, anxiety, agitation, drowsiness, nightmares, and abnormal thinking. Patients can also experience nausea, vomiting or constipation, joint pain, rash, bronchospasm and respiratory depression. With intravenous usage, hypotension, bradycardia and syncope have been reported.

Dizziness, euphoria, nausea, memory loss, constipation and lightheadedness are side effects of this drug.

Side effects can include mood alteration, mild sedation, excitation, decreased motor functions, drowsiness, sedation and deep coma. An overdose can result in death.

Behaviors such as sleep-driving, driving while not truly awake after ingestion of the medicine with no memory of the event, have been reported by some who have taken this drug.

Drowsiness and dizziness are common side effects of phenobarbital. Additionally, headaches, loss of appetite, nausea, excitation, and vomiting have been reported. Some patients have reported increases in feelings of depression and thoughts of suicide. If an individual abruptly stops using phenobarbital, side effects and withdrawal symptoms can include hallucinations, anxiety, twitching and sleep disturbance.

Nervousness, memory problems, headaches, and dizziness have been reported by patients taking this medication.

All barbiturates have a high risk of inducing dependency.